© UNICEF/Raphael Pouget
A fourteen-year-old girl is one of the first girls to be vaccinated against the Human Papillomavirus (HPV) in Mauritania.

With more than 300,000 women dying from cervical cancer each year, the World Health Organization (WHO) is joining advocates from across the globe on Wednesday to commemorate a Day of Action against the disease.

WHO Director-General Tedros Adhanom Ghebreyesus, alongside celebrities, First Ladies, cancer survivors and health and community organizations, have united to raise awareness and mobilize efforts, one year after the UN agency launched a landmark global initiative on cervical cancer elimination.

Tomorrow partners around the world will join the #CervicalCancer Elimination Day of Action. Use your customised frame and #GlowTeal.Together we can #EliminateCervicalCancer.🔵 Get informed🔵 Get screened🔵 Get vaccinated https://t.co/OgKCFSHYEP pic.twitter.com/D5dM5HgLHr

‘We have the tools’

They pointed to inequalities in accessing lifesaving tools and treatment, similar to what is happening during the COVID-19 pandemic, but also highlighted new breakthroughs in prevention and treatment.

“We have the tools to make cervical cancer history, but only if we make those tools available to everyone who needs them. Together with our partners in the WHO cervical cancer elimination initiative, that’s what we aim to do.”

Cervical cancer is the fourth most common cancer in women, and nearly all cases are linked to infection with human papillomavirus (HPV), an extremely common virus transmitted through sexual contact.

However, WHO said women and adolescent girls in the poorest countries are deprived of clinical screening facilities, HPV vaccines and treatments “which those in affluent places take for granted.". Even though risk of the disease increases six-fold for women living with HIV, many do not have access to vaccination or screenings.

Additionally, manufacturers have titled supply toward wealthier nations. Last year, just 13 per cent of girls aged nine to 14 globally were inoculated against HPV, while some 80 countries – representing around two-thirds of the global cervical cancer burden – have yet to introduce vaccination.

As with the pandemic, the disparity in death rates is stark, with nine in 10 occurring in low- and middle-income countries.

WHO praised countries that have taken steps to tackle cervical cancer during the COVID-19 pandemic.

Other nations were commended for training healthcare workers with newer, portable devices to thermally ablate pre-cancers, a process that uses heat to remove destroy tissues, or for expanding use of self-sampling for cervical abnormalities.

This latter process allows women to collect their own swab, which can reduce stigma and provide access to those who live far from health facilities.  WHO added that the samples can be run on the same laboratory platforms used to support polymerase chain reaction (PCR) testing for COVID-19.

The agency also reported setbacks during the pandemic, as access to screening services had fallen.  A recent survey of 155 countries found 43 per cent reported disruption to cancer treatment.  HPV vaccination rates globally have also declined, dropping from 15 per cent in 2019 to 13 per cent last year.

“There has been important progress towards cervical cancer elimination even over this unprecedented year,” said Princess Nono Simelela, Special Advisor to the WHO Director-General on Strategic Priorities, including Cervical Cancer Elimination.

“While we have seen major advances in new technologies and research, the critical next step is to ensure these are designed for and accessible in low- and middle-income countries, and that the health and rights of women and girls everywhere are prioritized in the recovery from COVID-19.”

WHO put the spotlight on new breakthroughs in cervical cancer prevention and treatment, such as the prequalification of a fourth HPV vaccine, which is expected to increase and diversify vaccination supply.

New recommendations to guide research into artificial intelligence-based screening technologies have also been released, which will help ensure that pre-cancers are detected as early as possible.

The agency also announced the first designated WHO Collaborating Centre for Cervical Cancer Elimination, located at the University of Miami in the United States, which will be important for research and technical assistance.

The Day of Action will be celebrated with a major global event organized from WHO headquarters in Geneva, with performances and remarks from cancer survivors and artists such as singer Angélique Kidjo.

Some 100 world monuments, including the Temple of Heaven in Beijing, China, and Niagara Falls in Canada, will be illuminated in teal – the colour of cervical cancer elimination – to mark the day.

Make history and eliminate cervical cancer for ever, urges WHO chief 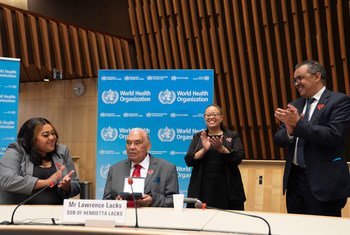 For the past seven decades, the cells of Henrietta Lacks, a Black American woman who died of cervical cancer, have saved countless lives, and made numerous scientific breakthroughs possible, such as the human papillomavirus and polio vaccines, drugs for HIV treatment, together with cancer and COVID-19 research.