© WFP/Leni Kinzli
Tens of thousands of Ethiopians have been displaced by the ongoing conflict in the Tigray region.

Over the past week, mass arrests of people reportedly of Tigrayan origin have continued in the Ethiopian capital of Addis Ababa and elsewhere, the UN rights office said on Tuesday.

The alert from the Office of the High Commissioner for Human Rights (OHCHR) comes as the World Food Programme (WFP) described the aid situation for vulnerable people in Tigray as “hand-to-mouth”.

Citing reports, OHCHR said that at least 1,000 individuals are believed to have been detained by police officers in the last seven days, on suspicion of being linked to the Tigrayan People’s Liberation Front (TPLF).

🇪🇹 #Ethiopia: We are concerned that at least 1000 individuals have been detained over the last couple of weeks as police invoke excessively wide provisions of the state of emergency to arrest, search and detain people: https://t.co/sSiBXtsquk pic.twitter.com/I0HT43u8Kt

“We are also concerned at some reports of ill-treatment in detention”, she noted, adding that the action number of detainees may be much higher.

Thanks to the “excessively wide provisions of the state of emergency declared on 2 November to arrest, search and detain people”, OHCHR said that in addition to the capital, arrests have been reported in Gondar, Bahir Dar and other locations.

Ms. Throssell said that 10 local staff in Addidas Ababa were still being held, along with 34 contracted drivers.

She explained that the sweeping powers of the current state of emergency, which was prompted by the fighting that began a year ago in the northern Tigray region, risked compounding the “already very serious human rights and humanitarian situation”.

The UN rights office spokesperson explained that its provisions are extremely broad, with vague prohibitions going as far as encompassing “indirect moral” support for what the Government has labelled as “terrorist groups”.

In an update on the aid relief situation in the conflict-affected north, WFP said that although recent weeks have seen some improvements in the movement of humanitarian cargo into Tigray, it was “still not enough” to meet the needs of 5.2 million people in the region.

Only 1,114 truckloads of supplies have entered Tigray since mid-July, WFP said, adding that there are currently over 14,000 tonnes of food in Mekelle, which is enough to sustain around 825,000 people for 45 days.

To date, the UN agency has finalized its second round of food distributions in Tigray, reaching close to 2.6 million people.

Fuel stocks have run out for all humanitarian operations inside the Tigray, however, and there are only 22,000 litres of fuel left inside Mekelle, 10,000 of which are reserved for the emergency relocation of staff and assets.

WFP said that it is continuing to negotiate with federal authorities to allow 16 fuel tankers held in eastern neighbouring Afar’s Semera to be permitted to enter Tigray.

“All parties have a role to ensure the free flow of aid into northern Ethiopia that will reduce and forestall further severe hunger or loss of life”, the UN food agency said.

© UNICEF/Mulugeta Ayene
A one-year-old boy is treated for malnutrition at a health centre in the Tigray region of northern Ethiopia.
♦ Receive daily updates directly in your inbox - Subscribe here to a topic.
♦ Download the UN News app for your iOS or Android devices. 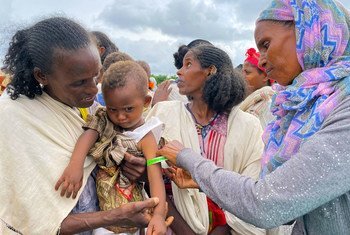 As the humanitarian crisis grows in Ethiopia’s conflict-affected north, the UN announced on Monday that $40 million in funds have been made available to scale up emergency operations. 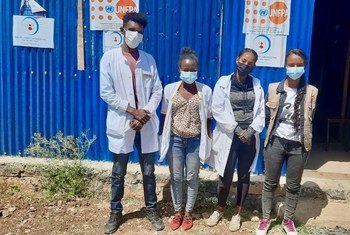 Even amid the dire humanitarian crisis in the Tigray region in northern Ethiopia, health workers continue to deliver safe, lifesaving care to mothers-to-be, with assistance from the UN Population Fund (UNFPA).