© UNESCO/Christelle Alix
A view of the Symbolic Globe by Erik Reitzel at UNESCO Headquarters in Paris, France.

But not far from the World Heritage Site monument in France, more than 20 Heads of State participated in a special ceremony to mark the occasion at the agency’s headquarters where artists Forest Whitaker, Renaud Capuçon, Angelique Kidjo, Aryana Sayeed, Farrah el Dibany, the group Joussour, Ray Lema and Laurent de Wilde, also joined the festivities.

In a message shown during the event, the UN Secretary-General, António Guterres noted that “UNESCO was born as a pillar of the United Nations system, in the wake of one of the darkest chapters in human history”.

“For more than 75 years, UNESCO has promoted dialogue and mutual understanding. World Heritage sites, Biosphere Reserves…emerged at UNESCO”, he said.

During a time of great inequalities, environmental crises, polarization and a global pandemic, the UN chief upheld that UNESCO’s role is “more critical than ever...to restore trust and solidarity...greater access to education for all, [to] promote cultural diversity, and steer technological progress for the greater good”.

Working with a diverse set of partners, Mr. Guterres said, UNESCO is forging a new social contract for education and lifelong learning.

The agency is also developing new tools to combat hate speech and misinformation while launching flagship initiatives in Iraq and Lebanon, using education and heritage to heal and rebuild.

For the Secretary-General, each of these efforts “speak to UNESCO’s importance at the centre of a more networked, inclusive and effective multilateralism, that delivers tangible benefits for people across the world”.

UNESCO’s General Conference, underway in Paris until 24 November, is also marking the anniversary.

During the event, the 193 Member States are poised to take landmark decisions, including adopting global recommendations on the ethics of artificial intelligence and another on open science.

Earlier this week, during the event, UNESCO hosted a Global Education Meeting and published the Futures of Education Report.

Carlos Chow/Regional Program for Protection of the Chinchorro Sites
The ‘Momia Guardiana’ sculpture in Chile was inscribed on the UNESCO World Heritage List in July.

A new exhibition, that can be seen online or at the agency’s headquarters, tells the story of UNESCO’s endeavours to understand, preserve and convey the best of humanity.

According to a note on the agency’s website, the UN cultural agency was born in the aftermath of two world wars out of the conviction that political and economic arrangements between States are not enough to build lasting peace.

The exhibition includes images of “often titanic projects”, such as the rescue and displacement, block by block, of the great temples of ancient Egypt, but also documentation on scientific projects about early tsunami warning systems and shared methods for studying soils, aquifers and the oceans.

There are also images illuminating exploration missions along the Silk Roads, in addition to campaigns that collect and preserve knowledge, traditions, music and the world’s memory.

“[They] all portray the aspiration to weave stronger links between people for the exchange and circulation of knowledge for centuries to come, in the hope that full consciousness of our affiliation will dispel forever the spectre of war”, according to the agency.

After year of ‘trials, tragedies and tears’, UN chief sends message of hope for 2021 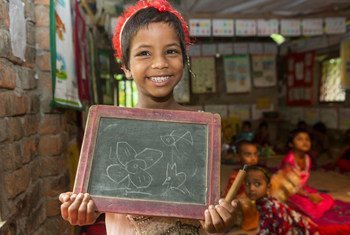 Imagining a new future for education by 2050, the UN Educational, Scientific and Cultural Organization (UNESCO) is asking three questions: What should be continued? What should be abandoned? And what needs to be creatively invented afresh? 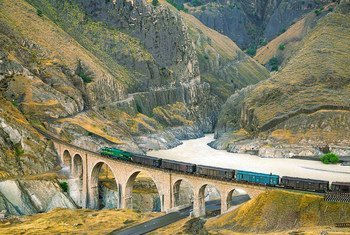 An ancient temple in India and a “cultural landscape” in Spain have become two of the latest sites to be registered on the UN’s prestigious World Heritage List.