UN Secretary-General António Guterres has urged Libyans to forge a spirt of national unity and overcome any remaining differences ahead of landmark presidential and parliamentary elections next month.

Mr. Guterres made the appeal in a video message to the Paris Conference on Libya, convened on Friday by French President Emmanuel Macron.  Some 30 countries and organizations are attending, according to media reports.

Libya today is closer than it has been for many years to solving its internal crisis &amp; breaking the cycle of political transitions.I urge all those with power &amp; influence over the situation to put the nation’s wellbeing &amp; prosperity ahead of their own personal interests.

The overriding goal of the conference is to seize this moment for peace, the UN chief said, underlining international support for Libya. The North African country has confronted numerous political and security crises since the overthrow of former leader Muammar Gadaffi a decade ago.

“Libya today is closer than it has been for many years to solving its internal crisis and breaking the cycle of political transitions.  We cannot miss this opportunity,” said Mr. Guterres.

He urged those with influence to put the country’s wellbeing and prosperity ahead of their own interests.

The UN chief said most Libyans support the 24 December elections, which are being held in line with a political roadmap adopted last year following a historic ceasefire between the country’s two rival administrations.

Nearly three million people have registered to vote so far, he added, and their aspirations and determination to participate in free and fair elections must be met.

“Elections are an essential next step on the road to peace and stability. This step has to be built on a strong foundation of inclusive and credible frameworks that can guarantee its success,” said Mr. Guterres.

“I strongly urge Libyans to come together in a spirit of national unity, to overcome remaining differences, and forge a consensus on the legal framework for the elections, in consultation with all relevant national institutions, adhering to their rules and procedures.”

He added that “individual ambitions cannot stand in the way of Libya’s peaceful transition”, while calling for all parties to participate in the election process and to respect the results.

Meanwhile,the presence of foreign elements in Libya’s internal political and security affairs remains a grave concern, and the Secretary-General called for an end to outside interference in the country.

The UN chief was encouraged by an Action Plan on the gradual withdrawal of mercenaries, as well as foreign fighters and forces, signed last month by Government and opposition military representatives known as the 5+5 Joint Military Commission (JMC).

“Now the plan must be implemented. And this requires the support and cooperation of all concerned stakeholders,” he said, noting that UN ceasefire monitors are in the country.

Reconciliation and rule of law

The Secretary-General acknowledged dialogue between Libya and neighbouring countries as another encouraging sign, given the “regional dimension” of the withdrawal of foreign fighters.  He stressed the need to support the 5+5 JMC and to respect the arms embargo in effect.

“We also need to extend our collective focus to supporting national reconciliation efforts, and to building and strengthening rule of law institutions founded on human rights,” he added.

“And we need transparent and equitable management of Libya’s wealth, as a starting point for the inclusive, sustainable development Libyans so desperately need.” 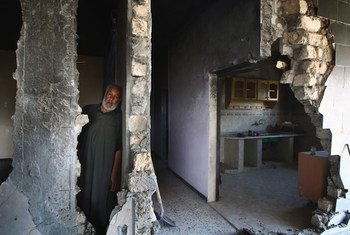 The United Nations on Friday welcomed the signing of a long-awaited Action Plan to withdraw mercenaries, foreign fighters and foreign forces from Libya, after years of fighting between warring factions across the oil-rich nation.