UN Sudan/Ayman Suliman
Demonstrators take to the streets in the Sudanese capital, Khartoum on 11 April 2019,

With mass civil protests against this week’s military coup planned for Saturday in Sudan, the UN Secretary-General has a simple message: “I urge the military to show restraint, and not to create any more victims.”

“People must be allowed to demonstrate peacefully, and this is essential”, António Guterres added, speaking to journalists in Rome on Friday morning, ahead of this weekend’s G20 Summit in the Italian capital.

Mr. Guterres reaffirmed his “strong condemnation of the coup”, which saw civilian leaders detained, stressing "the need to reestablish the transition system that was in place.”

Pro-democracy demonstrations have been held across the country’s capital, Khartoum, since the army dissolved the transitional government and detained civilian Prime Minister, Abdalla Hamdok, and his cabinet on Monday.

According to news agencies, at least 11 people have died. Latest reports suggest that Mr. Hamdok may be willing to negotiate the formation of a new government, if the military reverses its power grab, and releases detainees.

In light of tomorrow’s planned protests, the Special Representative of the Secretary-General for the country, Volker Perthes, reminded everyone of the fundamental right to peaceful assembly and freedom of expression.

“I reiterate my call for the military and security forces to respect the rights of the protestors, to show restraint, and to refrain from excessive use of force”, he said in a statement.

The Special Representative urged those coming out to demonstrate “to do so peacefully, and to remain committed, as in the past, to the spirit of silmiye”, using the Arabic expression for peacefully.

Mr. Perthes, who also serves as the head of the UN Integrated Transition Assistance Mission in Sudan (UNITAMS), continued to call for a return to constructive and inclusive dialogue among all stakeholders, to get the transition back on track in line with the Constitutional Document.

“UNITAMS remains ready to offer its good offices in this regard”, he concluded.

Long-time ruler Omar al-Bashir was overthrown by the military following months of popular protest in April 2019. A transitional government was set up comprising both military and civilian leadership, after a power-sharing agreement, that was due to lead to full democratic elections in 2023.

The country is also going through a humanitarian crisis.

This year, humanitarians have been seeking $1.9 billion for Sudan, but their appeal is only 30 per cent funded.

Aid agencies reached 7.4 million people across the country with protection and humanitarian assistance, during the period from January to June. 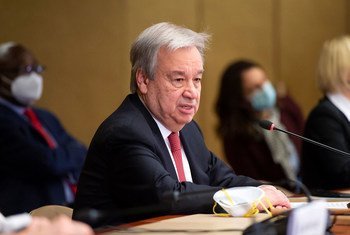 UN Secretary-General António Guterres on Tuesday renewed his call for the immediate release of all those detained in the military coup in Sudan, as the Security Council meets behind closed doors in New York to discuss the crisis.