UN News/Kulpash Konyrova
For the first time in many years, flamingos came to the Maly Taldykol lake in Kazakhstan's capital Nur-Sultan.

The birds have been flocking to Maly Taldykol, a small natural lake in the centre of the city, attracting admirers from nearby high-rise buildings and all around.

Historically, pink flamingos, pelicans and other migratory birds, have chosen nesting sites in lakes in the Korgalzhyn State Nature Reserve, part of a UNESCO World Heritage site, roughly 130 kilometres southwest of the capital.

This year, the flamingos again returned to Nur-Sultan, a stopping point on their long journey south. 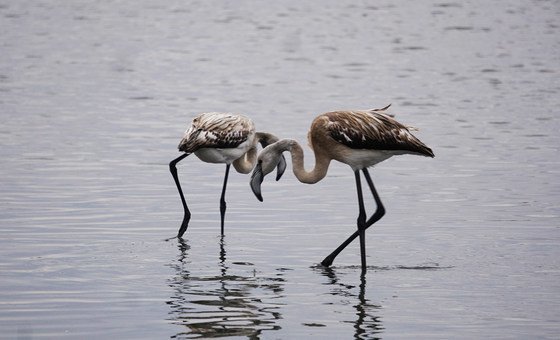 “Migratory birds bear witness to and are impacted by, the triple planetary crisis of climate change, biodiversity loss and pollution,” said Inger Andersen, head of the UN Environment Programme (UNEP).

“Making progress on reigning in climate change and ending biodiversity loss is critical to the survival of migratory birds. The journey of a migratory bird knows no borders and therefore, neither should our response to the planetary crisis.”

Nur-Sultan is located in central Kazakhstan, in a semi-arid steppe region which covers most of the Central Asian country.

The area surrounding Maly Taldykol lake once stretched for endless kilometres. In recent years, modern high-rise buildings have sprung up around the reservoir following the transfer of the capital from the south, in 1997.

Ruslan Urazaliev, an ornithologist and researcher at the Kazakh Association for Biodiversity Conservation, explained why his country is a haven for migratory birds.

“Since Kazakhstan is geographically located in the centre of the continent, two migration routes pass through the central part of the country, namely through our capital -- Afro-Eurasian and Central Asian -- and, accordingly, a huge stream of birds passes through this territory," he said.

The expert recalled that the nearest nesting colony of flamingos is in the Korgalzhyn reserve.  Those who flew to the capital came in search of food, and to rest up, before heading to warmer climes.

“Lake Maly Taldykol is typical for flamingos. They can filter water on it and hunt invertebrates. Flamingos love shallow lakes,” said Mr. Urazaliev.

Last week, he counted 83 flamingos within the Taldykol lake system.  The majority, 63, were adults.  The others were grey, indicating they were still young, but “in a year, the birds will begin to acquire their famous pink colour.”

How long the flamingos will remain in Nur-Sultan is unknown. In the Korgalzhyn reserve, they normally stay until the lake is covered with ice.

Forecasters are predicting frosty weather this week, and Mr. Urazaliev believes their visit to the capital will be fleeting.  The city, including Maly Taldykol lake, is “not a territory for wintering”, and the flamingos will be around for as long as weather conditions and food allow.

“Their ‘meteorological service’ works better than a human’s, and they know better when to move. They will not stay for the winter unambiguously,” he said, though adding weaker birds “may simply not be able to fly away.”

Until then, the love affair continues between the residents of Nur-Sultan and their feathered friends, and just in time for World Migratory Bird Day, when people are encouraged to connect and re-connect with nature.

The Day is celebrated twice a year, on the second Saturday in May and October, in recognition of the cyclical nature of bird migration and the different peak times along the flyways.