Only around 1 in 5 space industry workers are women

© NASA
NASA astronaut and Expedition 62 Flight Engineer Jessica Meir hovers for a portrait in the weightless environment of the International Space Station.

Only around 1 in 5 space industry workers are women

The number of women employed in the international space industry represents just 20-22 percent of the workforce, according to figures released by the UN; roughly the same proportion as 30 years ago.

To highlight this and other issues surrounding the push for gender equality, Women in Space, has been chosen as the theme for this year’s World Space Week, which began on Monday.

The goal is to bring more awareness to the issue of gender diversity and identify the obstacles that women are facing when entering space-related careers and contribute to discussions on ending disparities.

The UN also wants to show how women from different backgrounds and regions, face different issues and challenges within the industry.

World Space Week 2021 celebration!The largest celebration across the world. The theme of 2021 is "Women in Space". Come and join us in this global celebration by participating in multiple events. To know more visit https://t.co/3VwHT3dINc #WomenInSpace #wsw2021 pic.twitter.com/hzmq8DcfmT

Gender inequality is a long-standing and widespread issue in education and careers in Science, Technology, Engineering, and Mathematics (STEM) fields, both in developed and developing countries.

Overall, the number of women in the aerospace industry have fluctuated at around 20 percent for at least 30 years. Only 11 percent of astronauts so far, have been women.

To address some of those issues, the United Nations Office for Outer Space Affairs (UNOOSA) launched Space4Women, to promote women's empowerment.

For Simonetta Di Pippo, UNOOSA’s Director, “equality is the pre-condition for a better future.”

Over 560 people have traveled to space, but less than 70 of them are women. Of the 225 spacewalks that have been taken, only 15 were by women.

Women CEOs also represent 19% of the leaders in aerospace and defence, even though space tends to offer high earning jobs in a fast growing sector, providing women with more financial freedom and empowerment.

In the future, 90% of all jobs will require STEM related skills and women must possess skills and education to be competitive in the future employment market, says UNOOSA.

According to the UN, to succeed in addressing the 17 Sustainable Development Goals, the world must ensure that the benefits of space reach women and girls and that women and girls play an active and equal role in space science, technology, innovation, and exploration.

On 4 October 1957, the launch of the first human-made Earth satellite, Sputnik 1, paved the way for space exploration.

From the very beginning of the Space Age, the UN has recognized that outer space represented a new frontier for all humanity.

In 1958, the General Assembly adopted its first resolution related to outer space, resolution 1348 (XIII) entitled "Question of the Peaceful Use of Outer Space".

Almost a decade later, on 10 October 1967, the Treaty on Principles Governing the Activities of States in the Exploration and Use of Outer Space, including the Moon and Other Celestial Bodies, entered into force.

Space science and technology and their applications are increasingly being used to support a wide range of UN activities, with at least 25 entities, and the World Bank Group, routinely making use of technological breakthroughs being developed.

© NASA
NASA astronauts Christina Koch (left) and Jessica Meir work on their spacesuits ahead of a spacewalk they are conducting.
♦ Receive daily updates directly in your inbox - Subscribe here to a topic.
♦ Download the UN News app for your iOS or Android devices.

Feature: Woman mentor empowers girls to reach for the stars in space careers

Teachers are driving force behind ‘global education recovery’ from COVID-19 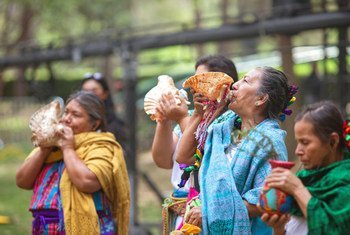 The UN’s gender equality and empowerment organization on Thursday published a flagship feminist plan for economic recovery and transformation, which aims to learn the lessons of the past, and seize the opportunity to handle COVID-related crises better.