© UNICEF/Mulugeta Ayene
A one-year-old boy is treated for malnutrition at a health centre in the Tigray region of northern Ethiopia.

The decision to expel United Nations staff from Ethiopia could affect aid distribution in the war-torn north of the country, where needs and displacement are rising, UN humanitarians said on Friday.

Engagement between the UN and the Government continues after the Ethiopian authorities on Thursday declared seven of the organization’s staff personae non grata and ordered them to leave the country within 72 hours.

UN Human Rights Chief @mbachelet strongly deplores Ethiopia's decision to declare 7 UN officials – incl. one of our own – as persona non grata. The @UN is now engaging with the authorities in the expectation they will clarify and reconsider as this is not an acceptable situation. pic.twitter.com/0BsgOhMP8c

In a statement that day, UN Secretary-General António Guterres expressed shock at the announcement, saying “all UN humanitarian operations are guided by the core principles of humanity, impartiality, neutrality, and independence.”

Jens Laerke, OCHA spokesperson in Geneva, said the agency was equally shocked and expects the decision to be “changed, or be reviewed, or modified in some way.”

OCHA is overseeing the emergency aid operation in northern Ethiopia, where conflict in the Tigray region has been raging for nearly a year.

“It is critically important that the humanitarian operation continues - and it does,” said Mr. Laerke, speaking to journalists on Friday.

Some 5.2 million people in Tigray are in urgent need of assistance, and the conflict has spilled over into two neighbouring regions, Afar and Amhara, “which rapidly means that the humanitarian needs are increasing, and also the number of internally displaced people are increasing.”

Humanitarians are also extremely concerned about food insecurity in Tigray.  Mr. Laerke said the number without access to sufficient food supplies rose from five per cent to 21 per cent between June and September.

He added that access and response were “not at all” at the level they should be.  Only 11 per cent of the trucks needed to bring in humanitarian aid arrived in Tigray since mid-July.

The UN High Commissioner for Human Rights, Michelle Bachelet, has deplored the decision, her office, OHCHR, said on Friday, while rejecting accusations of “meddling”.

“We have had no indication from the Government as to the basis for such a decision in relation to our colleague, and we insist on having clarification as to their reasons for taking this step,” Spokesperson Rupert Colville told journalists.

The UN Children’s Fund (UNICEF) characterized the decision by Ethiopia as “regrettable and alarming.”

The agency has been in the country for more than six decades, working to advance and protect the rights of the most vulnerable children.

“As the humanitarian situation in the country deteriorates – with children bearing its biggest brunt – our work is more urgent than ever,” UNICEF said in a statement on Friday expressing full confidence in its teams on the ground.

“Our programmes will continue. Our one and only priority is to support the children who urgently need our help, wherever they are.” 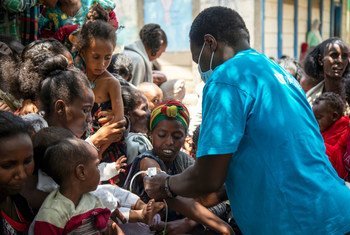