© UNICEF/Christine Nesbitt
A child waits for a nutrition screening in Wajirat in southern Tigray in Ethiopia.

The aid crisis in Ethiopia's Tigray region is worsening, the UN said on Thursday, with stocks of relief aid, cash and fuel “running very low or depleted”.

Since 12 July, less than 10 per cent of the trucks that should have reached desperate populations affected by months of fighting, have managed to get through, according to the UN aid coordination office OCHA.

The humanitarian situation in #Tigray is worsening with relief supplies running very low. 1.7 million people are estimated to face food insecurity in #Afar and #Amhara.Parties to the conflict must allow timely, safe and sustained access to all people affected by the crisis.

It noted that the only access route to Tigray, via Afar region using the Semera-Abala corridor, has been inaccessible since the 22nd of August.

Humanitarian partners estimate that 100 trucks of food, non-food items, and fuel need to enter Tigray every day to sustain an adequate response.

OCHA also highlighted that in addition to food, a minimum of 200,000 litres of fuel is required for the humanitarian response every week.

The UN agency pointed out that around $7 million is needed every week to sustain humanitarian operations in Tigray – equivalent to 300 million birr in local currency - including for staff salaries, local procurement, and cash-based assistance. But only 47 million birr has been brought in since July 12, it said.

The spillover of a 10-month long conflict between Ethiopian troops and the Tigray Defence Force into neighbouring Afar and Amhara regions, continues to affect civilians, resulting in food insecurity, displacement, and the disruption of livelihoods.

At least 400,000 people are living in famine-like conditions, with the UN Children’s Fund (UNICEF) warning that 100,000 face severe acute malnutrition within the year.

Adding to the Secretary-General’s call for an immediate end to hostilities and for the negotiation of a lasting ceasefire, OCHA urged all parties to the conflict to allow and facilitate timely, unfettered, safe and sustained access to all people affected by the crisis.

In a statement, acting Humanitarian Coordinator in Tigray, Grant Leaity, said that in accordance with international humanitarian law, “all parties to the conflict must allow and facilitate the rapid and unimpeded passage of impartial humanitarian relief to avert this looming catastrophe.”

“They must also respect and protect all humanitarian personnel and assets”, he added. “In particular, the Government of Ethiopia must allow and facilitate the unimpeded entry into the country, as well as movement within the country, of humanitarian relief personnel, supplies and equipment, including cash and fuel, whether over land, water or by air.

He also urged the Government to restore essential services, including electricity, communications, and banking services, as well as the flow of essential commercial commodities into Tigray.

“The lives of millions of civilians in Tigray and neighboring regions in Afar and Amhara depend on our capacity to reach them with food, nutrition supplies, medicine and other critical assistance. We need to reach them immediately and without obstruction to avert famine and significant levels of mortality.” 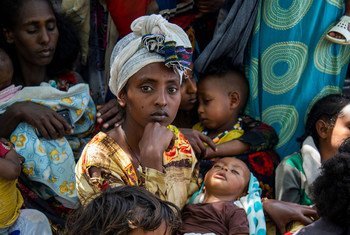 A military confrontation that started 10 months ago in Ethiopia’s northern Tigray region is spreading, with serious political, economic and humanitarian implications for the country and the broader region, the Secretary-General warned the Security Council on Thursday.