UNDP Lebanon
The Port of Beirut pictured in April 2021.

A donor conference to boost support for Lebanon one year after the devastating explosion in its capital, Beirut, represents a “unique opportunity” to renew commitment to the country and prevent a humanitarian catastrophe, the UN Deputy Secretary-General said on Wednesday.

The International Conference in Support of the Lebanese People, co-convened by France and the UN, aims to raise $350 million.  It was held on the anniversary of the 4 August 2020 blasts that left some 200 people dead and thousands more displaced.

Today marks one year since the tragic explosion at the port of #Beirut.It has been a year of extreme hardship for the Lebanese people. We must act now in global solidarity to end this humanitarian and economic catastrophe. pic.twitter.com/svWdIrpiNJ

“Twelve months on, our thoughts are with the families of the victims and the survivors, and all those affected. We continue to reiterate the need for an impartial, thorough and transparent investigation into the explosion,” Ms. Mohammed said in remarks to the virtual gathering.

Lebanon is experiencing one of the worst crises in its recent history, with a collapsing economy, political instability and a population in dire need as over half of all Lebanese are now living in poverty.

The country is also hosting scores of Syrian and Palestinian refugees, who, along with local families and migrants, are increasingly requiring emergency assistance to meet their needs. The COVID-19 pandemic has further strained the health system and heavily impacted the economy.

Lebanon has also been without a government for a year.  The UN deputy chief expressed hope for the swift formation of an administration under Prime Minister-designate Najib Mikati.

“The Lebanese people deserve strong institutions that can deliver relief, justice and redress –  and a government of national interest that can pursue an ambitious course for reforms and restore stability, growth and the prospects for a democratic future that provides opportunities and taps into the full potential of Lebanon’s young women and men,” she said.

More can be done

Ms. Mohammed outlined how the UN and partners have supported Lebanon in the aftermath of the explosion, ranging from mobilizing emergency assistance and re-establishing water connections, to carrying out essential repairs on hospitals and schools.

She told donors that with their support, much more can be done.

“Today we have a unique opportunity to renew our commitment and generate essential immediate financial assistance to the people in Lebanon to prevent a humanitarian catastrophe,” she said.

However, emergency efforts alone will not solve the crisis, she continued, highlighting the need for longer-term recovery that emphasizes sustainable development.

Ms. Mohammed said Lebanon requires a strong, inclusive, and comprehensive social protection system, particularly to benefit the most vulnerable.  The country will also have to pursue a path of inclusive growth, decent employment and social stability.

“We need an enabling environment to move the needle – ultimately, Lebanon needs an empowered government poised to rapidly implement the necessary reforms,” she stressed.

"This includes macroeconomic-fiscal reform, the promotion of accountability and transparency, legislation to ensure independence of the judiciary and to root out corruption and regulate public procurement.”

Ms. Mohammed concluded her remarks by underscoring how the conference demonstrates strong global support to the people of Lebanon.  She added that the UN will continue to stand with the country and support its recovery towards sustainable development. 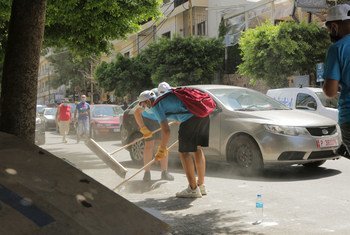 Young people in Beirut, which was devastated by an explosion in a warehouse at the city’s port on 4 August 2020, have been pitching in to get the Lebanese capital back on its feet, with support from the UN Children’s Fund (UNICEF).