It has never been more urgent to recommit to the spirit and fundamental principles of the 1951 Refugee Convention, the UN refugee agency said on Wednesday as it marked the 70th anniversary of the key international treaty.

“The Convention continues to protect the rights of refugees across the world,” said Filippo Grandi, the UN High Commissioner for Refugees. “Thanks to the Convention, millions of lives have been saved.”

Mr. Grandi expressed alarm over recent attempts by some Governments to disregard or circumvent the Convention’s principles, from expulsions and pushbacks of refugees and asylum seekers at land and sea borders to proposals for their forcibly transfer to third States for processing without proper protection safeguards.

For 70 years, the Refugee Convention has ensured that seeking asylum remains a fundamental human right. pic.twitter.com/cOnJpUVwQd

He stressed the need for the international community to uphold the key principles of refugee protection as laid out in the Convention, including the right of those fleeing persecution not to be returned to the path of harm or danger.

Speaking 70 years to the day after the 1951 Convention Relating to the Status of Refugees was presented to States for signing, the High Commissioner said the treaty was a crucial component of international human rights law and remains as relevant now as it was when it was drafted and agreed.

“The language of the Convention is clear as to the rights of refugees...remain applicable in the context of contemporary and unprecedented challenges and emergencies, such as the COVID-19 pandemic”, underscored Mr. Grandi.

The 1951 Refugee Convention was born following the aftermath of the Second World War.

On 14 December 1950, the UN published the statute, and on July 1951 representatives of 26 States met in Geneva to finalize the text of the treaty.

The Convention and the 1967 Protocol, which broadened the scope of those in need of international protection, define who is a refugee and the kind of protection, assistance and rights they are entitled to.

They remain the cornerstone of refugee protection today and have inspired numerous regional treaties and laws, such as the 1969 OAU Refugee Convention in Africa, the 1984 Cartagena Declaration in Latin America, and the European Union’s Common European Asylum System.

The principles of the Convention were reaffirmed in December 2018 by the Global Compact on Refugees, a blueprint for more predictable and equitable responsibility-sharing.

Both recognize that a sustainable solution to refugee situations cannot be achieved without international cooperation.

The Office of the UN High Commissioner for Refugees (UNHCR) has called on all States to adopt principles of refugee law, including the 1951 Convention, by enacting legislation and establishing institutions, policies and practices reflecting its provisions.

It also encourages countries that are not contracting States to accede to the Convention – as the 2018 signatory South Sudan continues to do.

The 70th anniversary of the Refugee Convention comes only a few months after UNHCR itself marked seven decades as the world’s mandated organization for the protection of those forcibly displaced.

© Arni/UN Archives
The 1951 Refugee Convention is signed in Geneva, Switzerland on August 1, 1951.
♦ Receive daily updates directly in your inbox - Subscribe here to a topic.
♦ Download the UN News app for your iOS or Android devices.

Refugees should not be turned into scapegoats following Paris attacks, says UN agency 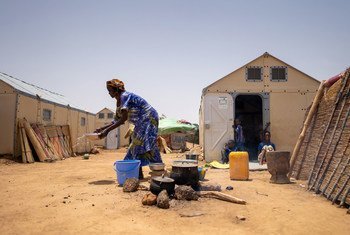 Rising violent attacks by jihadist groups in Burkina Faso are forcing record-breaking numbers of people to flee both inside the country and across international borders, the UN refugee agency, UNHCR, reported on Friday.