COVID-19: Africa ‘third wave’ not yet over, while vaccine inequity threatens all

COVID-19: Africa ‘third wave’ not yet over, while vaccine inequity threatens all

Although new COVID-19 cases in Africa have slowed following an eight-week surge, this “small step forward” could be short-lived, the Regional Office of the World Health Organization (WHO) said on Thursday.

Cases on the continent fell by 1.7 per cent this week to nearly 282,000, largely due to a sharp decline in South Africa, home to the bulk of reported infections.

"Many countries are still at peak risk &amp; #Africa’s unprecedented third wave surged up faster &amp; higher than ever before. The Eid celebrations which we marked this week may also result in a rise in cases." - Dr @MoetiTshidi #COVID19

However, removing the country from the data would show an 18 per cent increase, or more than 182,000 cases: what the UN agency called a uniquely steep and unbroken nine-week surge.

“Be under no illusions, Africa’s third wave is absolutely not over. This small step forward offers hope and inspiration but must not mask the big picture for Africa,” said Dr Matshidiso Moeti, WHO Regional Director for Africa.

“Many countries are still at peak risk and Africa's third wave surged up faster and higher than ever before. The Eid celebrations which we marked this week may also result in a rise in cases. We must all double down on prevention measures to build on these fragile gains.”

WHO said 21 African countries have seen cases rise by over 20 per cent for at least two consecutive weeks, which is three more than in the previous week.

The highly transmissible Delta variant has been found in 26 countries, while the Alpha and Beta variants have been reported in 38 and 35 nations, respectively.

WHO has been urging Governments to ramp up COVID-19 vaccinations as the squeeze on vaccine shipments eases.

Some 60 million doses should be arriving on the continent in the coming weeks, including from the United States, Europe, the United Kingdom and through the COVAX global solidarity initiative.  COVAX is also expected to deliver over half a billion doses alone this year.

“A massive influx of doses means that Africa must go all out and speed up the vaccine rollout by five to six times if we are to get all these doses into arms and fully vaccinate the most vulnerable 10 per cent of all Africans by the end of September,” said Dr. Moeti.

Around 3.5 million to four million vaccines are administered weekly in Africa, but numbers will have to rise to 21 million weekly at minimum to reach the September goal.

So far, the continent has received just 1.7 per cent of the world’s 3.7 billion doses, and 20 million people there, only 1.5 per cent of the population, have been fully inoculated.

Besides the $9.5 billion needed to buy enough vaccines, an additional $3 billion is required to fund operations, according to estimates by the World Bank.

African countries will also have to address fears surrounding side-effects, WHO added, a major factor in people’s reluctance to get vaccinated. Recommended actions include using political and traditional leaders as “vaccine champions”, community mobilization, and addressing misinformation on social media.

© UNICEF
A man in Abidjan, Côte d'Ivoire, receives a COVID-19 vaccination as part of the rollout of COVAX in Africa.

The price of inequity

Relatedly, vaccine inequity will have a lasting and profound impact on post-pandemic recovery in low-income countries, according to data released on Thursday by the UN Development Programme (UNDP), WHO and the University of Oxford.

The Global Dashboard on COVID-19 Vaccine Equity finds these nations would add $38 billion to their GDP forecast for this year if they had the same vaccination rate as high-income countries.

Global economic recovery is at risk if vaccines are not equitably manufactured, scaled up and distributed, the partners warned.

“In some low and middle-income countries, less than one per cent of the population is vaccinated – this is contributing to a two-track recovery from the COVID-19 pandemic”, said Achim Steiner, the UNDP Administrator.

“It’s time for swift, collective action – this new COVID-19 Vaccine Equity Dashboard will provide Governments, policymakers and international organisations with unique insights to accelerate the global delivery of vaccines and mitigate the devastating socio-economic impacts of the pandemic.”

The Dashboard builds on data from entities that include the International Monetary Fund (IMF), the World Bank, the UN Children’s Fund, UNICEF, and GAVI, the vaccine alliance, and analysis on per capita GDP growth rates.

Richer countries are projected to vaccinate quicker, and recover quicker, while poorer countries, which have been unable to vaccinate health workers and at-risk populations, may not see pre-pandemic growth levels until 2024.

"Vaccine inequity is the world’s biggest obstacle to ending this pandemic and recovering from COVID-19,” said Tedros Adhanom Ghebreyesus, the WHO Director-General. “Economically, epidemiologically and morally, it is in all countries’ best interest to use the latest available data to make lifesaving vaccines available to all. 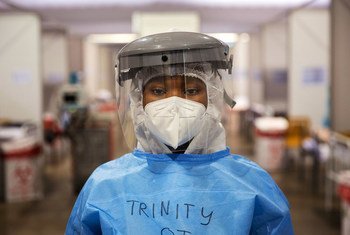 COVID-19 deaths in Africa have risen sharply in recent weeks, amid the fastest surge in cases the continent has seen so far in the pandemic, the regional office for the World Health Organization (WHO) said on Thursday.