The United Nations Human Rights Council has been given a mandate to collect and preserve information and evidence of crimes related to Sri Lanka's 37-year long civil war that ended in 2009.

The 47-member council on Tuesday adopted a resolution on Tuesday, brought by Britain on behalf of a group of countries, boosting UN rights chief, Michelle Bachelet’s staff and powers, with a view to future prosecutions.

#HRC46 | Resolution A/HRC/46/L.1/Rev.1 requests @UNHumanRights to enhance its monitoring and reporting on the human rights situation in #SriLanka, including on progress in reconciliation & accountability.

22 countries voted in favour of the text, 11 opposed and 14 abstained, including Sri Lanka’s neighbours, India and Nepal and most Muslim majority countries, except for Pakistan, Bangladesh and Uzbekistan, who voted against the motion.

In the resolution the Human Rights Council expressed "deep concern" at the “deteriorating situation" in Sri Lanka, and criticised the erosion of judicial independence, marginalisation of minorities and impunity.

The text pointed to trends emerging over the past year, which according to Elisabeth Tichy-Fisslberger, speaking on behalf of the European Union, represent clear early “warning signs of a deteriorating human rights situation in Sri Lanka”

In his introductory comments, UK Representative to the UN in Geneva, Julian Braithwaite, warned of trends which “threaten to reverse the limited gains made in recent years and risked the recurrence of policies and practices that gave rise to the grave violations of the past.”

Tichy-Fisslberger highlighted the “accelerating militarisation of civilian government functions, "the erosion of the independence of the judiciary", and "increased marginalisation" of Tamil and Muslim minorities, which has been “exacerbated” by the island's response to the COVID-19 pandemic, such as the reported prevention of Muslims, and members of other religions, from practicing their own religious burial rites.

The resolution also called on the Sri Lankan government to revise the law on the prevention of terrorism which rights groups have warned is being used as a weapon targeting dissidents and minorities in the country.

Under the PTA, it is permitted to detain anyone suspected of causing "acts of violence or religious, racial or communal disharmony”.

Representative for the Philippines, Evan P. Garcia, said the text was “driven by simplistic generalisations of complex conditions on the ground”, whilst Pakistan’s spokesperson, Khalil-ur-Rahman Hashmi argued that the draft resolution “fails to acknowledge the long struggle of the Sri Lankan people and government against LTTE (Liberation Tigers of Tamil Eelam),” and “shies away from a call for accountability of the LTTE and its sponsors and financiers”. 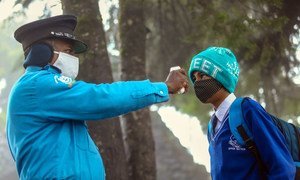 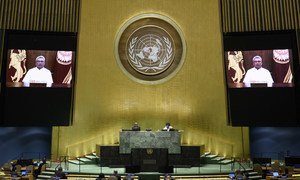 The President of Sri Lanka has highlighted the success of his country’s response to the COVID-19 pandemic, underscoring the importance of a well-coordinated approach, underpinned by robust local health care system, to contain the disease.