© UNICEF/Mohammed Huwais
Five years of conflict In Yemen has displaced 4 million people and left many facing death as widespread hunger stalks the nation.

Conflict drives hunger, and when that turns to famine, that then drives conflict, the UN chief told the Security Council on Thursday, adding that “if you don’t feed people, you feed conflict”.

“When a country or region is gripped by conflict and hunger, they become mutually reinforcing…[and] cannot be resolved separately”, Secretary-General António Guterres said via videoconference to the meeting which focused on how conflict and food security are interlinked.

And when hunger meets inequality, climate shocks, sectarian and ethnic tensions, together with grievances over resources, they then “spark and drive conflict”.

At the same time, conflict forces people to leave their homes, land and jobs; disrupts agriculture and trade; reduces access to vital resources like water and electricity; and also drives hunger.

‘One step away’ from famine

At the end of 2020, more than 88 million people were suffering from acute hunger due to conflict and instability – a 20 per cent surge in one year – and 2021 projections point to a continuation of this “frightening trend”, according to the top UN official.

He warned the Council of multiple conflict-driven famines globally, with climate shocks and COVID-19 “adding fuel to the flames”.

“Without immediate action, millions of people will reach the brink of extreme hunger and death”, Mr Guterres said, noting that there are more than 30 million people in over three dozen countries, “just one step away” from famine.

He drew attention to hunger crises across the Sahel, the Horn of Africa, South Sudan, Yemen and Afghanistan while pointing out that reduced humanitarian access threatens food insecurity, including in Tigray, Ethiopia.

The UN chief spotlighted that hunger and death begin long before the highest levels of food insecurity.

“We must anticipate, and act now”, he said, informing Ambassadors that he was setting up a High-Level Task Force on Preventing Famine, led by UN Emergency Relief Coordinator Mark Lowcock along with the World Food Programme (WFP), “to mobilize support to the most affected countries”.

Other Inter-Agency Standing Committee members will be involved as needed, including the World Health Organization, UN Development Programme (UNDP) and UN Women.

Against the backdrop that the more than 34 million people are already facing emergency levels of acute food insecurity, the UN chief recalled WFP’s $5.5 billion appeal “to avert catastrophe”.

“While all countries face some economic strain as a result of the COVID-19 pandemic, the solution does not lie in cutting aid to starving children”, he said, adding that “the disappointing outcome” of last week’s pledging event for Yemen “cannot become a pattern”.

Exemplifying how starvation has been used as a war tactic, including in Syria, South Sudan and Myanmar, the Secretary-General flagged it as “a war crime”.

He urged the Council to “take maximum action to seek accountability for these atrocious acts”, and to remind conflict parties of their obligations under international humanitarian law.

Addressing hunger is a “foundation for stability and peace”, said Mr. Guterres.

Noting that ending hunger requires political solutions to conflict, the UN chief urged all States to make that “a key foreign policy priority”.

“Do everything in your power to end violence, negotiate peace, and alleviate the hunger and suffering that afflict so many millions of people around the world”, he concluded. “There is no place for famine and starvation in the 21st century”.

‘Sliding toward the brink’

WFP chief David Beasley warned: “We are…sliding toward the brink of the abyss”.

“Conflict and instability are powering a destructive new wave of famine that threatens to sweep across the world”, taking an “unimaginable” toll in human misery, he said.

And the cycle of violence, hunger and despair is encompassing increasingly more people with consequences – from economic deterioration to mass migration and starvation – affecting everyone.

“Make no mistake: man-made conflict is the real culprit”, he upheld, adding that they are “entirely preventable”.

The WFP chief detailed that people facing dire situations, including in Yemen, Syria and the Democratic Republic of the Congo (DRC), and drew special attention to South Sudan, where he told of “children being fed mud”.

Following up on the Secretary-General’s call for $5.5 billion, Mr. Beasely urged the Council members to open their “hearts, show compassion, and give generously”.

Looking beyond the immediate crisis, he underscored the need to invest in conflict prevention to ensure that desperate families are not “forced to the brink of survival by the bullet and the bomb”.

“Please, don’t ask us to choose which starving child lives, and which one dies. Let’s feed them all.” 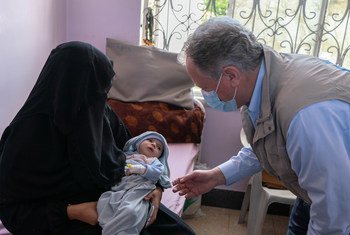 ‘Hell’ in Yemen, with millions ‘knocking on the door of famine’ WFP’s Beasley warns

Over half the Yemen population is facing acute food shortages “with millions knocking on the door of famine”, the UN food relief agency chief said on Wednesday, wrapping up a two-day visit to the country with an urgent plea for peace and funding to help feed vulnerable families. 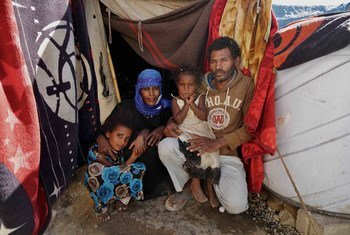