WHO
A vaccination campaign aims to reach over 2.8 million children with oral polio vaccines in South Sudan.

The second round of a vaccination campaign to protect more than 2.8 million children from polio is underway in South Sudan, the World Health Organization (WHO) reported on Thursday.

An outbreak of the life-threatening disease, which mainly affects children under five, was first declared last September and has spread to 17 counties in all states in the country, with 39 cases of vaccine-derived polio confirmed.

#Polio vaccination teams are conducting a house to house vaccination of children against polio in #SouthSudan, allow your children to be vaccinated. Thanks to @GPEI partnership, @WHOSouthSudan, @unicefssudan and other partners. pic.twitter.com/OUfatdEBeu

The campaign began in November and rollout of the second phase started on 16 February.  Workers have been going from house to house to inoculate children with the oral polio vaccine, while adhering to COVID-19 protocols.

WHO and partners are supporting the Ministry of Health with the nationwide initiative in a country where widespread displacement due to ongoing conflict and insecurity, as well as perennial flooding, have led to low rates of immunization, making children more vulnerable to polio.

While vaccine-derived polio is rare, it can occur when the weakened live virus used in the oral polio vaccine passes through populations where immunization rates are low and sanitation is inadequate.

Dr. Atem Nathan, Director General for Primary Health Care at the Ministry, said the goal is not only to stop the outbreak but to ensure South Sudan remains polio-free while improving routine immunization coverage.

“I am encouraging all caregivers to allow their children to be vaccinated by the house-to-house teams”, he said.

To stop the outbreak and prevent further spread, the Ministry, together with WHO, the UN Children’s Fund (UNICEF) and partners are stepping up surveillance in the search for children who may have developed sudden paralysis.

They are also strengthening investigation and timely transport of test samples.

“The campaign provides an opportunity for the vulnerable children to receive critical interventions that can avert life-threatening disease such as disability from poliomyelitis”, said Dr Olushayo Olu, WHO Representative for South Sudan.

Outreach has also been intensified through diverse channels such as community influencers, radio talk shows, household and focused group meetings, megaphone announcements, and through posters demonstrating the importance of vaccination.

“To turn this vaccination campaign into a success, we need to ensure that parents are fully aware of the importance of the vaccination and ask for their children to get the vaccine. Therefore, communication activities are critical”, said Andrea Suley, UNICEF’s interim Representative in the country. 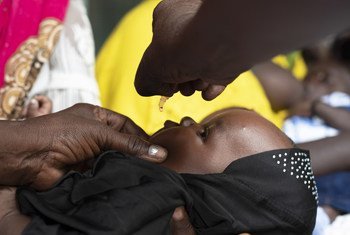 Although South Sudan had recently been declared free from the wild poliovirus, the UN health agency said on Friday that 15 children under the age of five are reported to have been infected by a vaccine-derived form of polio, which has left them with irreversible paralysis.