“Long a strong advocate for refugees, Mr. Biden has made important commitments to restoring the US refugee resettlement programme and ensuring that human rights and humanitarian values are at the centre of the US asylum system”, the UN High Commissioner for Refugees, Filippo Grandi, said in a statement.

“The Secretary-General looks forward to working with the new US administration to strengthen multilateral cooperation” to support migrants and refugees, said the statement issued on behalf of  António Guterres. “He also hopes to see the United States join the Global Compact for Safe, Orderly and Regular Migration.”

He noted that US support to address the needs of migrants and refugees has been strong and steadfast. “This partnership is needed now more than ever as we seek to provide assistance, protection and sustainable solutions to the displacement of record numbers of people who have been forced to flee their homes as a result of conflict, violence or disaster, or are migrating in the hopes of finding a better life for themselves and their families.”

For more than seventy years, UNHCR has enjoyed robust and steadfast support from the Government and people of the United States, said Mr. Grandi.

Congratulations, President @JoeBiden and Vice-President @KamalaHarris 🇺🇸.We at UNHCR look forward to working with you on strengthening US global support to refugees, rebuilding the US resettlement programme and ensuring that the US asylum system is effective, just and humane.

While the Trump administration had severely reduced the number of refugees admitted through the resettlement programme, as part of an anti-immigration stance that included a travel ban on citizens travelling from a group of mainly Muslim-majority countries, President Biden has signalled that he will restore it.

According to news reports, the Obama administration had planned in 2016 to admit 110,000 refugees, but the Trump White House moved to reduce that number each year, culminating in a cap of just 15,000 for this year – the lowest refugee admission figure on record.

The new President has reportedly pledged to raise the annual refugee admissions ceiling to 125,000.

Mr. Grandi said that UNHCR had enjoyed “robust and steadfast support” from US governments for most of its 70 year history.

“That support and partnership are as important as ever as we seek to provide protection and aid to the more than 80 million people around the world who have been forced to flee their homes, and find solutions to their displacement”, said Mr. Grandi.

“We look forward to deepening the strong and trusted partnership with the United States, and to working with the new administration and Congress to address the many challenges of forced displacement around the world”, said the top UN refugee official.

2019: A deadly year for migrants crossing the Americas

Resettlement in the United States 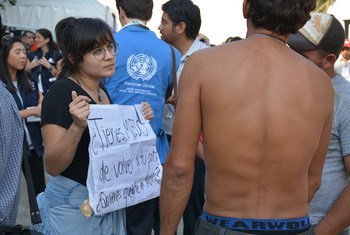