Senior UN officials have offered their congratulations to the president-elect of the United States Joe Biden, and vice president-elect Kamala Harris, on their election victory called on Saturday.

“The Secretary-General congratulates the American people for a vibrant exercise of democracy in their country’s elections last week”, said a statement released on behalf of António Guterres, on Monday.

“He congratulates the president-elect and vice president-elect”, the statement continued, “and reaffirms that the partnership between the United States and the United Nations is an essential pillar of the international cooperation needed to address the dramatic challenges facing the world today.”

The President of the UN General Assembly, Volkan Bozkir, noted in a tweet that Mr. Biden had “a long history of supporting the UN”, and in Ms. Harris, her election was a “milestone for gender equality.”

“I look forward to deepening UN-US ties and working together towards a safer and more prosperous world.”

President Donald Trump has not accepted the result and is mounting legal challenges in court, with his campaign team filing lawsuits in several key states.

The head of UN Women, Phumzile Mlambo Ngcuka, described the prospect of having the first ever woman as vice president, as “a hugely uplifting moment” for women and girls the world over, “especially for women of colour”. Ms. Harris, who currently sits in the US Senate, representing California, is of Jamaican and Indian descent.

The Director-General of the UN Educational, Scientific and Cultural Organization (UNESCO), Audrey Azoulay, said in tweet that the “global challenges of today call for a renewed commitment from the United States” for the common good that the pillars of science, education and culture represent.

She also noted that she was “very happy to see a teacher” moving into the top job at the White House, in the form of former vice president Biden’s wife, Jill, who has indicated that as First Lady, she will continue working fulltime.

Congratulations to President elect Joe Biden & Vice President elect Kamala Harris. For women & girls world over& especially for women of color, this is a hugely uplifting moment and for @UN_Women & #GenerationEquality

‘More crucial than ever’

“US leadership is more crucial than ever for the world’s most vulnerable”, said the head of the UN refugee agency UNHCR, Filippo Grandi, in a tweet. He warmly congratulated the pair and said the agency was looking forward to working with the new administration “on global and domestic refugee issues.”

That was a sentiment echoed by António Vitorino, the Director-General of the International Organization for Migration (IOM). He said on Twitter that the UN migration agency was looking forward to working with the new administration “on managing migration for the benefit of all.”

Earlier in the day, the head of UN health agency (WHO), Tedros Adhanom Ghebreyesus, congratulated the declared winners of the US election, noting that the World Health Organization was looking forward to working with the administration “very closely”.

After President Trump made the decision to withdraw the US from WHO earlier this year in response to alleged missteps over the early course of the coronavirus pandemic, the president-elect has repeatedly vowed to rejoin the organization.

Mr. Biden over the weekend also tweeted out that his administration would be recommitting to the Paris Agreement on climate change, on day one of the new administration. 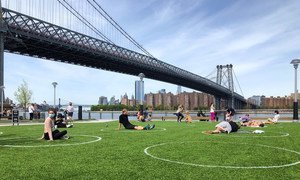 WHO’s Tedros says it is time for the world to heal, pushing back on ‘misguided nationalism’

World Health Organization (WHO) Director-General Tedros Adhanom Ghebreyesus told Member States on Monday that efforts to tackle climate change and poverty had been set back by a lack of global unity since major agreements were struck five years ago, and welcomed the chance to work with the presumptive new US administration of president-elect Joe Biden. 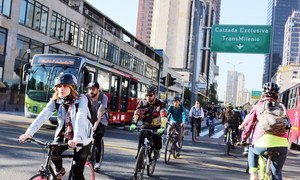 The UN climate change secretariat, UNFCCC, has underlined its commitment to work with stakeholders in the United States and beyond, to accelerate climate action, in line with an historic treaty on limiting global warming and curbing greenhouse gas emissions.