UN News/Vibhu Mishra
A view of the city of Bangkok, the capital of Thailand.
5 October 2020
SDGs

The need is all the more pressing given the COVID-19 pandemic and its impact, UN Secretary-General António Guterres outlined in a message.

“Access to clean water and sanitation, along with social distancing, are key responses to the pandemic. Yet in slums it has proved difficult to implement these measures”, said Mr. Guterres.

“This means an increased risk of infection, not only within slums, but in whole cities, many of which are largely serviced by low-income informal sector workers living in informal settlements”, he said.

Globally, more than a billion people live in overcrowded settlements with inadequate housing, and the number is expected to reach 1.6 billion by 2030.

To meet that demand, more than 96,000 housing units will need to be completed every day – and they must be part of the green transition, said the Secretary-General, urging greater partnerships, pro-poor policies, and regulations needed to improve housing in cities.

“As we strive to overcome the pandemic, address the fragilities and inequalities it has exposed, and combat climate change, now is the time to harness the transformative potential of urbanization for the benefit of people and planet,” he added.

Marked annually on the first Monday of October, World Habitat Day focuses attention on the state of the world’s towns and cities, and the right to adequate shelter. This year’s observance highlights the centrality of housing as a driver for sustainable urban development.

The World Day was established by the UN General Assembly in 1985.

According to the UN Human Settlements Programme (UN-Habitat), with urban areas accounting for 95 per cent of all confirmed COVID-19 cases, housing is now widely recognised as a frontline defence against the disease, with residents across the world being told to stay at home and wash their hands.

However, these simple measures are “impossible” for over a billion people, Maimunah Mohd Sharif, Executive Director of UN-Habitat, said in a separate message.

“We have seen hospitals overflowing, jobs disappearing, schools closed and movement restricted. But we can, and we will recover, and use our experiences to build back better and greener,” she added.

Noting that towns and cities moved quickly to provide emergency housing solutions and shelter for the homeless, quarantine spaces, truck in water and postponed evictions, Ms. Sharif urged that these achievements must not be reversed, once the pandemic is over.

“These temporary measures need to lead to long term policy changes,” she said.

“Otherwise, poverty and inequalities will be further exacerbated, and millions of people are at risk of losing their homes, once temporary bans on evictions are lifted, or when the lack of the stable income results in missed rent or mortgage payments.” 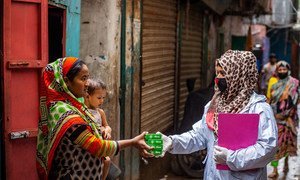