The UN Secretary-General repeated his call for a global ceasefire on Friday, commemorating the International Day of Non Violence, which is taking place this year in the shadow of the devastating human and socio-economic impacts resulting from the coronavirus pandemic.

In a message, Secretary-General António Guterres reminded everyone of their “special” duty, to stop the fighting and to focus on the common enemy, COVID-19.

On this International Day of Non-violence, I reiterate my call for a global ceasefire.

Making this a reality before the end of the year would ease suffering, help lower the risk of famine & create space for negotiations towards peace.

Now is the time to intensify our efforts. pic.twitter.com/BI06r7USsh

“There is only one winner of conflict during a pandemic: the virus itself,” said Mr. Guterres.

“As the pandemic took hold, I called for a global ceasefire. Today we need a new push by the international community to make this a reality by the end of this year,” he added.

Cease-fires, the Secretary-General said, would ease immense suffering, help to lower the risk of famine, and create space for negotiations towards peace.

“Deep mistrust stands in the way.  Yet I see reasons for hope.  In some places, we see a standstill in the violence,” he said, noting that many Member States, religious leaders, civil society networks and others backed his call.

“Now is the time to intensify our efforts. Let us be inspired by the spirit of Gandhi and the enduring principles of the UN Charter,” added Mr. Guterres.

In his message, the Secretary-General also said that the International Day highlights the “remarkable power” of non-violence and peaceful protest.

“It is a timely reminder to strive to uphold values that Gandhi lived by: the promotion of dignity, equal protection for all, and communities living together in peace,” he said.

The UN General Assembly, through a resolution in 2007, designated 2 October as the International Day of Non-Violence to coincide with the birthday of Mahatma Gandhi, who led the Indian independence movement and pioneered the philosophy and strategy of non-violence.

♦ Receive daily updates directly in your inbox - Subscribe here to a topic.
♦ Download the UN News app for your iOS or Android devices.
Non-Violence|UN International Days 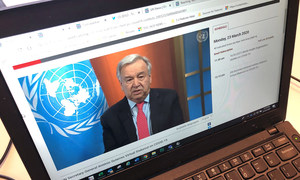