Unless countries act now, the COVID-19 pandemic could erase recent “fragile progress” towards gender equality, the UN Secretary-General warned on Thursday, urging governments to put women at the centre of recovery and response.

António Guterres issued the charge in a speech to a UN General Assembly high-level meeting to commemorate the 25th anniversary of the landmark Fourth World Conference on Women held in Beijing, China.

The Beijing Conference, as it is known, marked a significant turning point on the global agenda, making it clear that women’s rights are at the heart of equality and justice around the world.

But as the UN chief told the gathering, the Conference was also a “wake-up call” as these rights are still being denied, hindered and ignored everywhere.

“COVID-19 has emphasized and exploited the continued denial of women’s rights. Women and girls are bearing the brunt of the massive social and economic impact of the pandemic,” he said, speaking from the rostrum in the General Assembly Hall.

Deliver on the Beijing promise

“Twenty-five years after Beijing, we are facing a women-led recession as women employed in the informal economy are first to lose their jobs,” Mr. Guterres continued, outlining the aftershocks of the pandemic. These include a “shadow pandemic” of gender-based violence, and an increase in early marriage and other abusive and repressive practices affecting women and girls.

As we commemorate the 25-anniversary of the Beijing Declaration for women’s empowerment &amp; #genderequality, let's remember that no country has achieved gender equality. Governments must step up efforts to ensure fulfillment of women’s/girls’ rights! #Beijing25 #GenerationEquality pic.twitter.com/nZKqd4GqBN

“Unless we act now, COVID-19 could wipe out a generation of fragile progress towards gender equality,” he stated.

While the pandemic has demonstrated the need for a strong push to meet what the UN chief called “the unfulfilled promise of Beijing”, it is also an opportunity for transformative thinking that puts women at the front and centre of response and recovery.

“Stimulus funds should put money directly into women’s hands through cash transfers and credits. Governments should expand social safety nets to women in the informal economy, and recognize the value of unpaid care work,” he advised.

The Beijing Conference concluded with a groundbreaking Platform for Action, with commitments covering 12 areas of concern, such as power and decision-making, poverty, violence against women, education, human rights and discrimination against girls.

“In both containing COVID-19 and promoting post-COVID economic and social recovery, it is particularly important that we address the special needs of women and deliver on the Beijing Declaration and Programme for Action”, said Chinese President Xi Jinping in a statement recorded for the event.

Since Beijing, major advances have been made in the global fight for gender equality, as various UN agencies have documented. In 1995, there were 12 women Heads of State and Government worldwide. Today, there are 22. Maternal mortality has dropped by nearly 40 percent during this period, more girls are now in school, and women are increasingly involved in peace processes.

However, this progress is not enough; plus, it has been slow, according to the Executive Director of UN Women, which supports countries in achieving gender equality and the empowerment of women.

A time for disrupters

Phumzile Mlambo-Ngcuka emphasized the need for women’s leadership, including young women, in efforts to build back better after the pandemic.  “Women and the people of the world are demanding these changes”, she said in a pre-recorded statement.

“This is the time for disrupters, young and old," Ms. Mlambo-Ngcuka continued, saying it is time for actions to change the course of history for women and girls, especially women between the ages of 25 to 34 who are increasingly more likely to live in extreme poverty than their male counterparts.

“It’s time to bring an end to discriminatory laws, norms and homophobia, to end men’s violence against women and girls, and make a concerted effort to put women at the heart of climate justice. "

Besides the Beijing Conference anniversary, and the global pandemic, 2020 is a milestone year for the UN, which turns 75 next month.  January also saw the start of a Decade of Action towards achieving the Sustainable Development Goals (SDGs) and their promise of a more fair and equitable world for all people, and greater protection of the planet.

Given the SDG context, there is no longer any excuse for gender imbalances,  according to Ms. Mlambo-Ngcuka.

“Women are now calling for a leapfrog to 50 per cent representation, or parity in all spheres, including cabinets, corporate boards and throughout the economy, including women as beneficiaries of COVID-19 fiscal stimulus packages, engagement in all peace processes, and closing the digital divide,” she said, urging leaders to “fast-forward” the modest gains made since Beijing.

Back up words with deeds

The rights of women and girls are non-negotiable, the head of the UN Population Fund (UNFPA) underlined. Dr. Natalia Kanem called on leaders to “scale-up” action and investments.

“We urge you to back up words with deeds, and with funding for programmes and services that transform women’s lives,” she said, speaking from the podium.  “Investing in women and girls is not just a question of rights; it’s also smart economics, with benefits to society many times the cost.”

The President of the UN General Assembly, Volkan Bozkir, appealed for everyone, everywhere to act now on behalf of the world’s women and girls so as to “level the playing field.”

Everyone must act now

He also issued a call to girls worldwide, including his own granddaughters: “Know this: there is nothing that women cannot do”.

The General Assembly President urged girls to “Dare to be the first. Dare to do what no woman has done before,” adding that the world needs more women in power.

Nomzamo Mbatha: The world has a long way to go to achieve gender equality
♦ Receive daily updates directly in your inbox - Subscribe here to a topic.
♦ Download the UN News app for your iOS or Android devices. 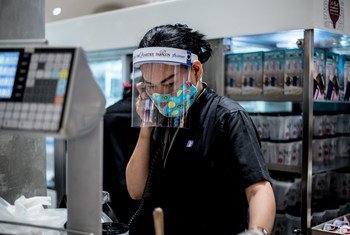 Chief executives of 110 companies in Thailand on Wednesday, have signed up to a new set of UN principles on women’s economic empowerment, pledging to improve gender equality in the boardroom, equal pay for equal work, and safer and more inclusive workplaces. 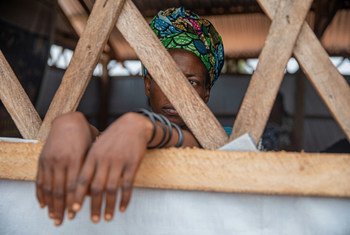 From domestic violence to sexual abuse, online harassment and increased child marriage, gender-based violence (GBV) is “a global scourge” that is being exacerbated by the COVID-19 pandemic, the UN chief said on Tuesday.