COVID-19: ‘Legitimate concerns’ must be heard, and fears addressed over misinformation

UN OCHA/Gema Cortes
A person reads about COVID-19 on their cell phone. During the pandemic, smart phones with Internet have become a life-line for many, keeping them connected with their families and providing them with vital information.
29 September 2020
Health

Amid continuing uncertainty, fear and anxiety around the world over the COVID-19 pandemic, senior UN officials are keen to stress the legitimacy of concerns, listen carefully to citizens around the world, and help them distinguish between misinformation and accurate information, based on science.

On the margins of the General debate of the UN General Assembly, UN News spoke to UN Under-Secretary General for Global Communications, Melissa Fleming, and from the World Health Organization (WHO), Dr. Sylvie Briand, Director of Pandemic and Epidemic Diseases.

In a joint interview as part of the UN's SDG Media Zone coverage, they discussed how important it is for the UN to engage with the public, and highlight international collaborative efforts to develop effective and affordable vaccines for all.

Misinformation is not new ... We’ve had misinformation as far back as you look in history. The difference here is that we have a global pandemic that is happening in the social media age – Melissa Fleming

“What is difficult in the current period is, first, there is a lot of fear of the disease and a lot of anxiety from the population, as well as a lot of uncertainty”, said Dr. Briand. “It is a new disease. Many things are first time in this pandemic.

“Misinformation is not new”, said communications chief Fleming. “We’ve had misinformation as far back as you look in history. The difference here is that we have a global pandemic that is happening in the social media age.”

In a video message broadcast at a high-level event on mitigating the harm from misinformation and disinformation on 23 September, UN Secretary-General, António Guterres, said COVID-19 was not just a public health emergency, but it is a communications emergency too and that as soon as the virus spread across the globe, inaccurate and even dangerous messages proliferated wildly over social media, leaving people confused, misled and ill-informed.

According to Dr. Briand, when people are anxious and uncertain of a number of things they tend to compare with things they know already or things they have experienced in the past.

Regarding the COVID-19 vaccine, she noted that people “have already preconceptions about vaccines or fear about other vaccines”.

What is very important in this period now ... is to really start building a space for a very open dialogue, a two-way dialogue with the population so we can hear their concerns and answer them – Sylvie Briand

“What is very important in this period now, because we don’t have yet the vaccine, is to really start building a space for a very open dialogue, a two-way dialogue with the population so we can hear their concerns and we can answer their concerns for as much as we can”, she added.

A high-level event is taking place later on Tuesday, on how to tackle the coronavirus together through the ACT-Accelerator initiative, launched in April as a global collaboration to accelerate the development and production of diagnostics, treatments and vaccines on an equitable basis.

UNICEF/Gabreez
Saba, 23, a community health worker in Amran, Yemen, spends her days meeting people and informing them about vital health information, including COVID-19 and how families can protect themselves.

The head of UN Global Communications (DGC) believes the Organization has the means and the valuable opportunity now to reach people everywhere “with good information, (and) solid public health guidance based on science”.

But “there is not just good information circulating out there”, it is “mixed with bad information, bad science produced by bad actors”, she told UN News.

“That’s where we come in” on the department level, she noted, with the ability to communicate the scientific facts “in a way that is more accessible, more interesting, more social media-optimized so that it does go into people feeds.

Stressing the importance of accurate information, it was important to let people know “how to spot it and how to talk to friends and family about the kind of misinformation and conspiracies that they are being exposed to, and maybe believing”, said the communications chief.

The Department of Global Communications has pioneered an initiative to counter misinformation, through the Verified campaign. It offers content based on science, content that is simple, accessible, and relatable.

“We are working with social media platforms, we have recruited information volunteers, who are our kind of digital first responders around the world, members of the public who are communicating for us in their communities with the content that we provide”, Melissa Fleming explained.

A recent study conducted by researchers from Harvard University and three other universities, suggests that under-25s in the United States are most likely to believe virus-related misinformation about the severity of the disease and how it originated.

“I think that is probably a reflection of who is most on social media. It is a younger population, that is getting a digital overload and so their attention span is probably not long enough to look at the piece of information they are getting and really question it”, said Melissa Fleming.

Part of the initiative is to get people to stop and think, before they post: “What Pause does, is introduce a new social norm, kind of like the campaign, Don’t drink and drive, for example”, the UN official explained.

“What we want our new social norm to be is, pause, take care before you share. And for people to be educated, we are going to be pushing more information out to young people, and everybody, about how much misinformation is out there (and) how to spot misinformation”.

“We believe and we have evidence to believe, that if people took this 30 seconds break, and really question what they were seeing, this would go a long way to stopping the spread, but it is not going to stop it completely”.

What is also need is “more work by the social platforms to not just flag misinformation but really stop it in its tracks”, she added.

According to Dr. Briand, “because people are overwhelmed with information, it is very hard for them to distinguish what is good and what is bad”. “But we think that if you give more good information to people so that they can make informed decisions about their health, then they are less likely to listen to misinformation”, she said.

WHO is working with young people so they feel part of the solution and not ostracized for being spreaders of the coronavirus: “We work with them to change this perception”, she added.

“The most important thing is to work with communities at local levels”, said Melissa Fleming. “We need to think globally but go local. Think globally about the solutions to COVID-19, about the vaccine, no one is safe until everyone is safe”.

♦ Receive daily updates directly in your inbox - Subscribe here to a topic.
♦ Download the UN News app for your iOS or Android devices.
Verified|coronavirus|COVID-19 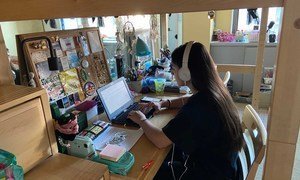 The UN is asking people to make the same judgement calls they’ve been applying to social distancing, to social media, and take extra care before sharing.