© OCHA
Standing on the left, a volunteer working to raise awareness on COVID-19 at an IDP camp in northern Idlib, Syria. Displaced from Homs herself, she knows the importance of helping protect the IDPs.
16 September 2020
Humanitarian Aid

Reports from inside Syria are pointing to a much broader spread of COVID-19 than the number of confirmed cases – currently 3,618 – suggests, the UN’s top humanitarian official says.

Mark Lowcock told the Security Council on Wednesday that it won’t be possible to grasp the extent of the coronavirus outbreak in Syria until laboratory testing is stepped up.

Despite risks, humanitarians deliver life-saving aid to over 4 million people every month. My remarks to the Security Council: https://t.co/He8XTpg6Lj pic.twitter.com/hTofn80Cs8

“We do know that community transmission is widespread, as almost 90 per cent of newly confirmed cases cannot be traced to a known source”, he said, adding that COVID-19 infection rates among health workers are also on the rise.

Presenting the Council with his monthly update on the humanitarian crisis in Syria, he said that a shortage of health workers and medical supplies, combined with temporary shutdowns, are putting more pressure on Syria’s decimated health system.

Citing an analysis by his Office for the Coordination of Humanitarian Affairs (OCHA), he said that in low-income countries, healthcare disruptions resulting from the pandemic could trigger more deaths from preventable illnesses that from COVID-19 itself.

Mr. Lowcock also emphasized the economic impact of the pandemic in Syria, citing recent data that shows that 45 per cent of businesses have temporarily shut down, 25 per cent running at reduced levels and 15 per cent permanently closed.

On the question of humanitarian access, the subject of deep rifts among Council members, he said that the United Nations is adjusting its cross-border operations into the northwest to meet the needs of the millions of people who depend on aid shipments to survive.

All UN humanitarian convoys, including those going to Aleppo, now travel from Turkey into Syria via Bab al-Hawa after the Council, through resolution 2533 (2020), closed a second crossing point with more direct access to the north-east.

Mr. Lowcock said that the distribution of medical supplies from the last World Health Organization (WHO) overland shipment to reach north-east Syria in July is still ongoing.  Recipients so far include 17 hospitals, including 12 previously supplied through the cross-border mechanism.

On “cross-line” humanitarian deliveries within Syria, he called on all parties to redouble efforts to hammer out details for extending aid to the north-west, an area that includes Aleppo.

♦ Receive daily updates directly in your inbox - Subscribe here to a topic.
♦ Download the UN News app for your iOS or Android devices.
syria|COVID-19 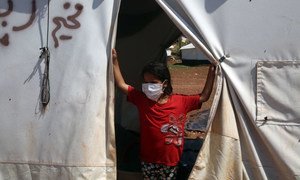 Despite a reduction in largescale hostilities since a ceasefire in March, the UN Syrian Commission of Inquiry reported on Monday that armed actors continue to subject civilians to horrific and increasingly targeted abuse.