Nuclear weapons are still one of the most serious threats to mankind, and the dangers are growing. Young people can play an important role in ensuring that they are eliminated once and for all, says the UN’s top disarmament official, ahead of International Youth Day on 12 August.

This coming Wednesday, the world will highlight young people as essential partners in effecting change. The annual celebration of International Youth Day is also an opportunity to raise awareness about the problems facing youth,  including the continued existence of nuclear weapons.

Seventy-five years ago last week, the only two nuclear bombs ever used in warfare were detonated over Hiroshima and Nagasaki, Japan, killing approximately 210,000 people within months and sickening tens of thousands more with cancer and lifelong diseases.

Nearly 14,000 nuclear warheads exist today, most of them many times more powerful than those two bombs dropped on Hiroshima and Nagasaki. The world has succeeded at reducing some of the risks, especially after the end of the Cold War, but Ms. Izumi Nakamitsu, United Nations Under-Secretary-General and High Representative for Disarmament Affairs, has said the danger is now “higher than it has been in generations.”

Ms. Nakamitsu talked to UN News about why, and how, young people are helping to tackle this crisis.

‘The memory stays with you’

“When catastrophes occur, they tend to turn into numbers, and it is important to remember that everyone who suffered the devastation from the atomic bombings 75 years ago has a story. They had lives, people they loved and who loved them.

When I was about 10 or 12 years old, I visited Hiroshima and Nagasaki, and once you have seen them the memory stays with you.

Eliminating these indiscriminate and inhumane weapons is the UN’s top disarmament priority – and one of its oldest goals.

But the world’s progress to rid the world of nuclear weapons has slowed down, and now we are actually starting to go backwards. This back-sliding increases the possibility that a nuclear weapon could be used– either intentionally, by accident or because of a misunderstanding.

In today’s complicated international environment – with priorities ranging from climate change to sustainable development, pandemics and migration – nuclear weapons are still one of the most urgent threats to tackle.

Here are three reasons why.

First, they are the most destructive weapons ever invented. Most that exist today are vastly more powerful than the bombs that devastated Hiroshima and Nagasaki.

Second, nuclear weapons are one of the two threats, along with climate change, that extend to all life on the planet. Any use of  nuclear weapons could cause an environmental cataclysm.

Third, no country can adequately respond to the vast suffering and death that would follow any use of a nuclear weapon. Most countries, and international organisations like the ICRC, have voiced concern about this. Some countries have adopted a new treaty which prohibits nuclear weapons.

The power of youth

As part of the largest generation in history, today’s young people hold tremendous power – and responsibility.
Jayathma Wickramanayake, the UN Secretary-General's Envoy on Youth, stressed this during a visit to Japan earlier this year. She said, “The atomic bombings of Hiroshima and Nagasaki should always remind us, especially the younger generations, how important disarmament and denuclearization is. Young people under the age of 30 account for over half of the world’s population, and we can’t achieve world peace without their participation.

The Secretary-General’s Agenda for Disarmament recognizes youth as “the ultimate force for change”. When they are educated, engaged and empowered, they can have decisive influence on how their societies and governments view nuclear weapons.

We have seen their power before. Young campaigners, many of them women, helped lead successful global efforts to ban landmines and cluster munitions under international law, and they are rallying many countries to reduce nuclear threats.

Some of these campaigns have been awarded with a Nobel Peace Prize. Last year, the United Nations General Assembly reaffirmed the contributions that young people can make in sustaining peace and security.

Young people can contribute by starting discussion groups, hosting film screenings and planning informative events with fellow students and friends. I recommend reading the United Nations book, “Action for Disarmament: 10 Things You can Do!” to learn more about these and other outreach strategies.

How to get involved

At the UN Office for Disarmament Affairs, we want to help create space for young people to meaningfully contribute to progress on disarmament. Through a new outreach initiative, called “#Youth4Disarmament”, we are working to engage, educate and empower young people by offering resources like e-newsletters, training programmes and an upcoming website dedicated to youth and disarmament.

We also recently announced our first group of “Youth Champions for Disarmament”. These 10 young people will receive training on general principles of disarmament, non-proliferation and arms control through both online courses and a two-week in-person study tour in Vienna, Geneva, Hiroshima and Nagasaki. They will exchange ideas with experts from think tanks, civil society organizations and the diplomatic field, and develop a plan to engage their communities on disarmament-related issues.

It is vital for countries to engage with their younger citizens. They have the power to effect change, and their ideas can help strengthen our collective peace and security—now and for the future. With their fresh ideas and perspectives, together we can find solutions to the world’s gravest dangers.”

‘We are facing a learning crisis’, UN chief warns on International Youth Day 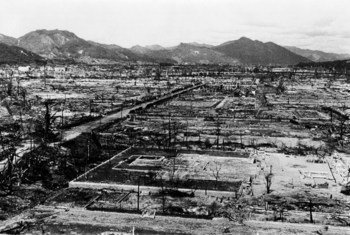 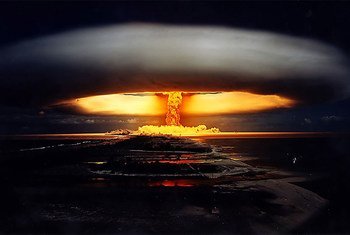 The dangerous legacy of nuclear weapons testing continues to affect many communities, a leading rights expert said on Thursday, on the 75th anniversary of testing in the United States, that heralded the nuclear age.