WFP/David Fernandez
As a result of a tropical storm in El Salvador, thousands of people have lost their livelihoods and become food insecure.
3 August 2020
Health

Across Central America and the Caribbean, the more than 70 million children impacted by the COVID-19 pandemic could soon face another threat – catastrophic hurricane storms, the UN Children’s Fund (UNICEF) warned on Monday.

“In the coming days and weeks, children and families will be at risk of being hit simultaneously by two disasters, COVID-19 and hurricanes,” cautioned Bernt Aasen, UNICEF Regional Director for Latin America and the Caribbean.

In the coming days and weeks, children and families will be at risk of being hit simultaneously by two disasters, #COVID19 and a stronger hurricane season.

Displacement and service interruption caused by storms could leave children and families more vulnerable to virus.

While acknowledging that displacement, infrastructure damage and service interruptions caused by storms – particularly in coastal areas – could render individuals more vulnerable to the disease and its impacts, the UN children’s agency expressed special concern that a powerful storm could severely undermine ongoing efforts to stem COVID-19.

The coronavirus could spread easily in crowded emergency shelters or displacement sites where physical distancing would be difficult to ensure, according to UNICEF.

At the same time, existing control measures like handwashing could falter if water, sanitation and health infrastructure were to be damaged or destroyed.

“This is the perfect storm we fear for the Caribbean and Central America,” said the UNICEF official.

In addition to straining national and local health systems in the region, the pandemic is also raising serious questions about the aftermath of a catastrophic hurricane, including movement restrictions and budget shortfalls, which may hinder national hurricane preparedness efforts.

“As we continue to take precautions to keep families safe from COVID-19, efforts to prepare for hurricane now are vital to mitigate the spread of virus among the most vulnerable communities”, Mr. Aasen explained.

Danger on the horizon

As UNICEF reported in a recent Child Alert, over the coming years the Caribbean region is expected to experience intensified storms and subsequent population displacements.

In late May, tropical storm Amanda caused flooding and landslides in parts of El Salvador, Guatemala and Honduras. At least 33 people were killed in the region and thousands were displaced. All three countries have confirmed cases of COVID-19.

Across the region, UNICEF is working to support hurricane preparedness efforts and public health responses to COVID-19 through education, community outreach and technical support.

In collaboration with Governments and other partners, the agency is working to build disaster resilience among communities in the region, including by adjusting hurricane preparedness and response plans to reflect COVID-19 risks with a focus on vulnerable groups, like children, pregnant women and single-headed female families.

Moreover, UNICEF is also working to improve coordination mechanisms and tools for timely needs assessments and response based on evidence and with Governments on climate change adaptation policies to ensure that they are child sensitive and informed by the long-term perspectives of youth and adolescents.

♦ Receive daily updates directly in your inbox - Subscribe here to a topic.
♦ Download the UN News app for your iOS or Android devices.
COVID-19|coronavirus|disaster preparedness|extreme weather

US must improve COVID-19 strategy to keep tens of millions from falling into poverty, urges rights expert 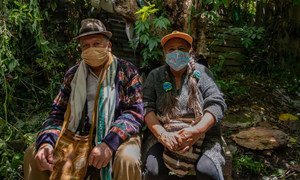 In Latin America, where much of the region has dealt with years of sluggish growth, the economic crisis brought about by the COVID-19 pandemic is pushing millions more into poverty, says Alicia Bárcena, the head of the UN regional body for Latin America and the Caribbean (ECLAC). 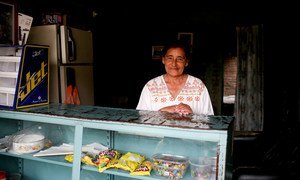