The head of the UN mission in the Democratic Republic of the Congo (DRC) is asking the Security Council for its continued support as the mission adds the fight against COVID-19 to its to-do list, while also dealing with a fragile security situation in the east of the country.

Leila Zerrougui made the request on Thursday as the 15-member organ ponders the longer-term future of the UN Stabilization Mission in the Democratic Republic of the Congo (MONUSCO) – the biggest of all the 13 UN peacekeeping missions – after its current mandate runs out on 20 December.

“The COVID-19 pandemic has introduced an additional layer of complexity and concern to the existing issues that we face in the country,” she said, presenting the Secretary-General’s latest report on the situation in DRC.

Government focused on the virus

President Félix Tshisekedi’s government is understandably focused on its immediate response to COVID-19, with MONUSCO helping the authorities limit the spread of the coronavirus and alleviate the socio-economic impact on the population, she said.

“This necessary work has nonetheless slowed the pace of the Government’s programme and reform agenda”, she told the Council, which since mid-March has been meeting via video-teleconference due to the pandemic.

Turning to the security situation, she said that many parts of eastern DRC are still torn by violence due to armed groups and inter-community violence – a trend favoured by the impact of political turmoil and the pandemic on the government’s ability to confront those who are attacking civilians.

The situation in parts of Ituri province, which borders South Sudan and Uganda, has taken a grave turn for the worse in recent months, with element of the South Sudan People’s Defence Forces reportedly carrying out incursions into the north of the province.

In North Kivu, the Allied Democratic Forces (ADF) – presumed to have carried out a 22 June attack on a MONUSCO convoy in which an Indonesian peacekeeper was killed – is apparently regrouping, while militia groups are proliferating in South Kivu. In Tanganyika province, over 100 civilians have died in inter-community fighting.

“The security forces of the DRC need our full support for the work that they do, and (they) are indeed in need of continued, significant assistance to improve their logistical, training and operational capacities,” she said.

In extending MONUSCO’s mandate on 19 December 2019, the Council took note of an assessment by an independent strategic review that an absolute minimum transition period of three years will be needed for the Mission’s drawdown and exit.

At the same time, the Council invited the Secretariat to consider further reductions in MONUSCO’s military deployment – currently capped at 14,000 troops – and its area of operations, while making the protection of civilians the mission’s strategic priority.

Ms. Zerrougui briefed the Council just hours after the World Health Organization (WHO) announced that after nearly two years and 2,280 deaths, the world’s second-deadliest Ebola outbreak is finally over in eastern DRC.

♦ Receive daily updates directly in your inbox - Subscribe here to a topic.
♦ Download the UN News app for your iOS or Android devices.
Democratic Republic of the Congo|COVID-19|coronavirus|peacekeeeping 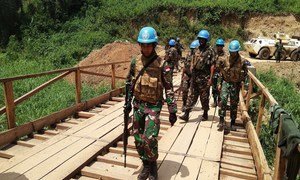 The United Nations has strongly condemned an attack believed to be carried out by rebel militia on peacekeepers serving with the UN Stabilization Mission in the Democratic Republic of the Congo (MONUSCO), which left one Indonesian ‘blue helmet’ dead, and another injured. 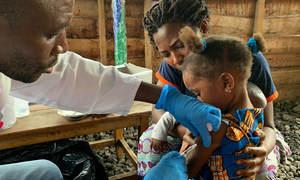 Fewer children are getting vaccinated in the Democratic Republic of the Congo (DRC) and the COVID-19 pandemic is almost certainly going to make matters worse, the United Nations Children’s Fund (UNICEF) says. If the trend continues, it could trigger a resurgence in deadly childhood diseases such as polio, chickenpox, measles, yellow fever, hepatitis B, diphtheria, tetanus, whooping cough and meningitis.