From fighting with guns to fighting the pandemic

From fighting with guns to fighting the pandemic

In countries suffering from conflict, readjusting to life in a peaceful society is a challenge, both for former fighters and the wider community. Since the spread of the COVID-19 crisis, the UN is having to refocus many of its programmes, aimed at reducing violence in communities, and rehabilitating combatants.

"Before I did not have a trade but, thanks to this training, I am becoming a valuable asset to my country", says Nassira Zakaria, from Kaga Bandoro, a northern market town in the Central African Republic (CAR).

Ms. Zakaria, a trainee seamstress in a Community Violence Reduction programme, run by the UN peacekeeping mission in CAR, MINUSCA, says that she is glad to be able to turn away from armed conflict, learn new skills and, above all, be of use to her community. "By making face masks, I can contribute to the fight against COVID-19".

Preventing a return to conflict

Just over a year ago, a peace agreement was signed by the CAR Government, and officially armed groups in the country. Since then, progress has been slow, and the situation in CAR, one of the world’s poorest countries, remains fragile.

Community Violence Reduction programmes are one of the tools used by the UN to prevent a return to conflict, and support communities. The peace process has been marred by a lack of political will from some of the armed groups, but MINUSCA has still managed to disarm and demobilize over 1,300 ex-combatants.

Projects involve vocational training in trades such as plumbing, electrical work and construction: in CAR, some 3,124 people have learned new skills. Today, the focus of these programmes has shifted to COVID-19 prevention: trainees are sewing masks for the local population, making soap, constructing handwashing facilities, converting buildings into COVID-19 isolation wards, and learning more about the virus.

"I now know a lot more about COVID-19, thanks to this training", says Nabayo Rosine, a member of a CVR programme in the south-eastern city of Bangassou. "Now I know how to protect myself and teach those around me about the pandemic. Health comes first: someone who is not healthy cannot be at peace".

For Pierre Ubalijoro, chief of the Disarmament, Demobilization and Reintegration initiatives in MINUSCA, the communities involved in CVR programmes are seeing life improving: "I think our presence really has an added value, because of the toll that the war has taken. I believe that our presence has contributed to the alleviation of the people’s suffering."

"And the projects that we're focusing on are designed to be sustainable, and make a long-term difference. For example, we're building wells in areas where there is less water available. A lack of water is often a source of inter-communal conflict, so these projects will make a positive impact on the community, long after the COVID-19 crisis is over".

MINUSCA
Construction of a COVID-19 isolation centre in Bria, CAR. Part of a MINUSCA CVR project

Similar efforts to improve life for civilians are underway in the UN peacekeeping mission in Mali (MINUSMA), where the security situation is fraught, both for the local population and peacekeepers. The Agreement for Peace and Reconciliation in Mali has seen some 1,000 newly integrated soldiers deployed to Gao, Timbuktu, Kidal and Ménaka, as part of the first reconstituted Malian Defence and Security Forces in the North. Violence continues and, in May, three UN peacekeepers were killed in northern Mali when their convoy hit a roadside bomb.

Because of the security situation, not all parts of the country are accessible to the UN teams, as Tahir Ali – the head of a Disarmament, Demobilization and Reintegration (DDR) team in Gao, northern Mali – explained.

"In the north, infrastructure is very bad, so it can take one and half hours to travel 15 kilometres, and an armed escort is needed. There is also the risk of improvised explosive devices, so you have to deal with a lot of challenges. We will have to visit the project site two or three times during implementation, and then revisit it after the project has been completed to see what impact it has made. So, accessibility has to be a top priority".

Meeting the needs of the population

Despite the uncertainty, Community Violence Reduction programmes are helping participants to gain vocational training in agriculture and gardening, electrification and security, construction, and other areas designed to meet the basic needs of the population.

Sam Howard, one of the UN officials running the programmes, told UN News that providing temporary job opportunities to young people, is helping them to stay out of trouble: "these jobs keep them busy, and help to prevent them from being recruited by criminal or armed groups. They also help our efforts to enhance dialogue and reconciliation in various communities".

Some projects are, literally, bearing fruit, and having a positive impact: "In the region, we successfully handed over a project, run by women and youth, to create a vegetable garden", said Mr. Ali, who explained that, to ensure that all parts of the community are involved, each initiative in the programme is managed by a representative of the local women, and a representative of the youth.

"We provided water, training and seeds in December of last year, and they began cultivating the land. When I went back in February, the land was full of vegetables. Thanks to this project, they are now able to meet their own needs, and earn money by selling the surplus".

Mr. Ali and Mr. Howard agreed that the COVID-19 pandemic has caused problems for their projects, with some postponed until the next fiscal year. Others have been repurposed, as in CAR, to involve community members in improving hygiene measures (for example, the production of face masks). UN personnel are also distributing "anti-COVID kits", which include soap, hand sanitizer and masks.

As in many other regions where the UN has a presence, the effect is also being felt by the staff of MINUSMA. Regular UN flights in and out of regional bases have been suspended, said Mr. Ali, and many staff are working remotely. Despite these measures, positive cases of COVID-19 have been reported in the bases. 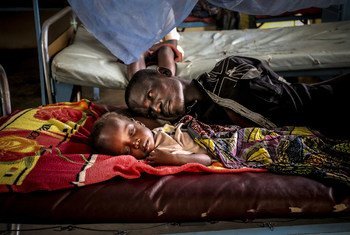 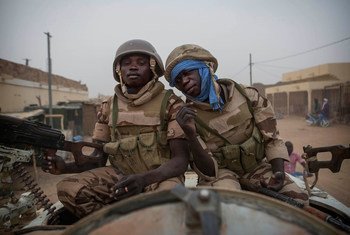 Three UN peacekeepers from Chad were killed in northern Mali on Sunday when their convoy hit a roadside bomb near Aguelhok, in the restive Kidal region. The improvised device also seriously injured four others who are now receiving medical care, the UN Stabilization Mission in Mali (MINUSMA) said in a statement.