UNICEF/UNI180029/Colfs
Children fill their cups at a water point built by UNICEF at Kanyosha III primary school in Bujumbura, Burundi.
17 May 2020
Peace and Security

Ahead of presidential and local elections in Burundi on Wednesday, the African Union (AU) Commission and the United Nations (UN) urged the authorities to provide a safe and secure environment for citizens to cast their votes.

In a joint statement issued on Sunday, the partners said they have been following the electoral campaign and remain concerned about reports of intimidation and violent clashes between supporters of opposing sides.

"The two Organizations encourage all entities involved in organizing the 20 May 2020 elections, the defense and security forces and state-owned media to fully contribute to preserving a stable and peaceful environment, pre-requisite for free, inclusive, fair, transparent and credible elections in Burundi," the statement said.

"They urge all political actors to refrain from all acts of violence and hate speech, and resort to dialogue, to enable the holding of consensual and peaceful elections. They also encourage the Burundian authorities to ensure and facilitate the full participation of women during this electoral process."

The AU Commission and the UN Secretariat also called on political parties to abide by the Code of Conduct which they had signed last December.

Authorities in the East African country were also urged to implement preventive measures to protect citizens from the COVID-19 pandemic.

Last week, a UN Commission of Inquiry also expressed alarm over violence and human rights abuses in the run-up to the vote.

Members also deeply regretted the government’s decision to expel four staff members of the World Health Organization (WHO) from the country.

♦ Receive daily updates directly in your inbox - Subscribe here to a topic.
♦ Download the UN News app for your iOS or Android devices.
united nations|African Union|Burundi|COVID-19 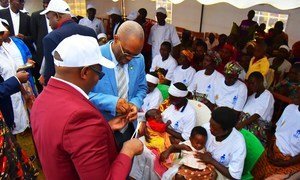