IRMCT Video
Félicien Kabuga, one of the world’s most wanted fugitives who is alleged to have been a leading figure in the 1994 genocide against the Tutsi in Rwanda was arrested in Paris by French authorities.

UN Secretary-General António Guterres has welcomed the arrest on Saturday of one of the world’s most wanted fugitives, his Spokesperson said in a statement.

Félicien Kabuga, alleged to be a leading figure in the 1994 Genocide Against the Tutsi in Rwanda, was apprehended in Paris by French authorities as a result of a joint investigation with the UN’s International Residual Mechanism for Criminal Tribunals (IRMCT).

He was indicted by the UN International Criminal Tribunal for Rwanda in 1997 on seven counts of genocide and crimes against humanity.

"Mr. Kabuga’s apprehension sends a powerful message that those who are alleged to have committed such crimes cannot evade justice and will eventually be held accountable, even more than a quarter of a century later," the statement said.

As  head of the Comité Provisoire  of the Fonds de défense nationale ("National Defence Fund") from about 25 April 1994 to July 1994, Mr. Kabuga allegedly helped finance the genocide,

He was also president of the Comité d’Initiative of Radio Television Libre des Milles Collines, whose broadcasts were used by Hutu extremists to incite hatred against Tutsis and identify individuals for subsequent killing.

"The Secretary-General's thoughts today are first and foremost with the victims of Mr. Kabuga’s alleged crimes, the victims of other serious international crimes, and their families.  Ending impunity is essential for peace, security and justice," the UN statement continued.

Mr. Kabuga was arrested in what was described as a sophisticated, coordinated operation with simultaneous searches across a number of locations.

He is expected to be transferred to the IRMCT, where he will stand trial.

"For international justice, Kabuga’s arrest demonstrates that we can succeed when we have the international community’s support," said Serge Brammertz, Chief Prosecutor at the UN mechanism.

"This result is a tribute to the unwavering commitment of the United Nations Security Council, which established the Mechanism to continue the accountability process in Rwanda and the former Yugoslavia."

Mr. Kabuga had been wanted by the IRMCT since 2013.  The mechanism performs essential functions previously carried out by the international tribunal for Rwanda, which closed in December 2015, and another for the former Yugoslavia, which closed two years later.

The UN Secretary-General praised  the cooperation between the UN mechanism and the French authorities for the arrest, underlining the responsibility of all States to cooperate with the IRMCT in locating and arresting any fugitives at large. 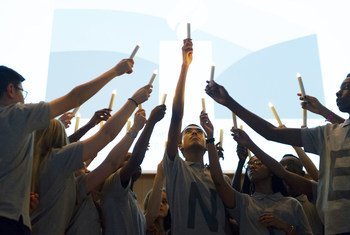 Remembering the more than one million people who over the course of just 100 days, were systematically killed in Rwanda, 26 years ago, the UN chief underscored on Tuesday that “we must never again let such an atrocity occur”.