©UNICEF/Tanya Bindra
Seventeen-year-old mother leaves Honduras with her one-year old son, hoping to get a visa for the United States. (File)
15 May 2020
Migrants and Refugees

Chronic violence, insecurity and now COVID-related restrictions have put tens of thousands of Central Americans at risk of increased hardship and even death, the UN refugee agency (UNHCR) said on Friday.

By the end of last year, violence in the region forced some 720,000 people to flee their homes, almost half of whom currently remain displaced within their own country, according the UN Office of the High Commissioner for Refugees (UNHCR).

And with COVID-related lockdowns in Honduras, El Salvador and Guatemala, community leaders and some internally displaced people (IDPs) are reporting that organized criminal groups have been exploiting the confinement, to strengthen their control over local communities.

Chronic violence and insecurity, coupled with the restrictions in response to #COVID19 is risking the lives of tens of thousands of people in the north of Central America. https://t.co/IaBzLzsfyH

“This includes the stepping up of extortion, drug trafficking and sexual and gender-based violence, and using forced disappearances, murders, and death threats against those that do not comply”, UNHCR spokesperson Andrej Mahecic told reporters at a regular press briefing in Geneva.

Movement restrictions make it harder for those that need help and protection to obtain it, while those that need to flee for their lives, face increased hurdles in seeking safety.

In addition, strict lockdowns have resulted in many displaced and vulnerable people losing their livelihoods.

“As businesses are ordered to close and informal jobs vanish, people living in these vulnerable communities are losing their only sources of income”, the UNHCR spokesperson flagged.

Faced with these dire circumstances, people are increasingly resorting to negative coping mechanisms, including sex work, that put them at further risk both in terms of health and gang exploitation.

The nature of internal displacement in northern Central America, which often involves one person or family at a time – forced to leave to safeguard children or facing direct threats to their lives - can make new movements difficult to detect.

UNHCR regularly relies on a network of community leaders in high risk areas to raise the alarm: “They have told UNHCR that they expect a rapid increase in forced displacement as soon as the lockdown measures are lifted”, Mr. Mahecic said.

UNHCR there to help

In the meantime, the UNHCR is working across the north of the region, where millions over the years have attempted to migrate north into the United States, concentrating on the most critical humanitarian interventions that movement restrictions allow.

To protect people under threat and violence, UNHCR coordinates with partners to ensure that state authorities respond to imminent risks a timely manner.

“We also provide remote counselling, and work with shelters for especially high-risk cases, coordinating movements with the authorities”, the UNHCR spokesperson said.

To help mitigate the impact of income loss of at-risk communities, UNHCR has scaled-up its cash assistance programmes to help IDPs meet basic needs, such as food, medicines and housing.

“We are also working with partner organizations, and local authorities to distribute food baskets and cleaning items”, he added.

Mr. Mahecic said that the impact of the pandemic risked setting back the progress being made towards “creating livelihoods and job opportunities for IDPs; and in building the capacity of state authorities to address their needs, including through the creation and implementation of laws and policies that seek to advance their rights”.

He concluded by reiterating UNHCR’s support to state authorities in continuing to assist internally displaced and at-risk communities.

Hounded by gangs, one family among hundreds of thousands of internally displaced Hondurans on the move told UNHCR how they reluctantly started a new life across the country.

Forty-two-year old Mariana [pseudonym] explained how on three different occasions she stood up to violent gangs that took over her hometown.

“The first time, they laughed with scorn,” she said. “The second time, they threatened to kill me … and the third, it almost cost us our lives”.

According to government statistics, some 247,000 Hondurans are estimated to have been internally displaced since 2004 – the vast majority fleeing extorsion, coercion and targeted threats by gangs and other criminal organizations.
They fled after the gang leader tried to kidnap Mariana’s 16-year-old daughter and later shot her 14-year-old son in the leg.

As soon as the house was empty, the gang took over, transforming the family home into a so-called “crazy house”, where victims were taken to be tortured and killed.

According to UNHCR, around one-third of those displaced report having had their property seized by their persecutors, and many eventually flee to another country.

♦ Receive daily updates directly in your inbox - Subscribe here to a topic.
♦ Download the UN News app for your iOS or Android devices.
Central America|COVID-19|coronavirus|gang violence 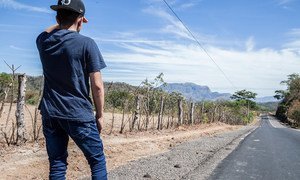 A new law in El Salvador opens a door for tens of thousands of forced displacement victims in the country to access to life-saving humanitarian assistance and have their basic rights restored, said the UN refugee agency (UNHCR) on Friday.