UN Photo/Evan Schneider
The Fifth Avenue Presbyterian Church in Manhattan displays a message of hope as the coronavirus continues to kill people in New York City.

International health experts will convene on Thursday to evaluate the evolution of the COVID-19 pandemic and advise on updated recommendations, the head of the World Health Organization (WHO) said on Wednesday during his latest virtual press conference from Geneva.

WHO chief Tedros Adhanom Ghebreyesus explained that the Emergency Committee meeting will mark three months since members agreed that the new coronavirus disease was an international global health emergency.

“In the three months since the Emergency Committee last met, WHO has worked day in, day out to sound the alarm, support countries and save lives”, he said.

The Emergency Committee consists of 15 independent experts from across the world brought together under a treaty known as the International Health Regulations (IHR), which guides global health response.

COVID-19 first emerged in Wuhan, China, and at the time of its last meeting, there were just over 80 cases outside the country, and no deaths. The global caseload has now approached nearly three million, and nearly 205,000 deaths.

'We sounded the alarm early’

Tedros outlined WHO’s actions starting from 31 December 2019, when it first learned about the “pneumonia of unknown cause”, through to his pronouncement of the global health emergency on 30 January, which was based on the Emergency Committee’s advice.

The rationale for providing the timeline was “to be clear about what WHO knew, and what we did”, he said.

“From the beginning, WHO has acted quickly and decisively to respond and to warn the world. We sounded the alarm early, and we sounded it often”, he told journalists.

“We said repeatedly that the world had a window of opportunity to prepare and to prevent widespread community transmission.”

After learning about the cluster of pneumonia cases, WHO sought more information from China on 1 January. A day later, it informed the Global Outbreak Alert and Response Network (GOARN), which includes more than 260 institutions in over 70 countries.

China came back to WHO through a face-to-face meeting in Beijing on 3 January, and the UN agency subsequently reported the unusual pneumonia cases on Twitter. Tedros added that no deaths were reported at that stage.

Two days later, WHO shared detailed technical information, including precautionary advice to its 194 Member States and IHR focal points, with guidance on the basis that there could be human-to-human transmission of the new virus.

Information was also published for use by the scientific and public health communities, as well as the global media.

Tedros detailed additional WHO actions taken over this period, such as guidance on how to detect, test and manage cases, and a checklist for countries to help assess their capacities for detection and response. WHO also published the first instructions for making diagnostic kits after China shared the genetic sequence of the virus.

Tedros said that on 14 January, WHO tweeted reports from China indicating that authorities there had found no clear evidence of human-to-human transmission of the virus.

“This is in line with our practice of reporting to the world, information that countries report to us. We post country reports as is”, he explained.

“However, earlier the same day, WHO held a press briefing at which we said that, based on our past experience with coronaviruses, human-to-human transmission was likely. Our senior experts participated in that press conference, and that news was carried by mainstream media.”

Additionally, WHO staff visited Wuhan on 20 and 21 January, and reported that evidence suggested human-to-human transmission was occurring.

Tedros convened the Emergency Committee over 22 and 23 January. As members were divided over whether WHO should declare a global public health emergency, they asked to meet again  within 10 days.

During this period, Tedros and other senior WHO staff travelled to Beijing where they met with President Xi Jinping and other Chinese leaders to learn more about the national response there, and to offer assistance.

It was agreed that an international team of scientists should travel to the country, consisting of experts from China, Germany, Japan, the Republic of Korea, Nigeria, the Russian Federation, Singapore and the United States of America.

Tedros reconvened the Emergency Committee on 30 January, following which he declared that the new coronavirus constituted a Public Health Emergency of International Concern. 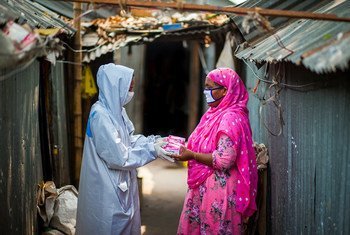