Giles Clarke
Nurses and healthcare workers outside at a hospital in New York City demand better protection against the COVID-19 virus.
10 April 2020
Peace and Security

António Guterres said heightened solidarity is needed if the world is to defeat the crisis, which he called the "gravest test since the founding of this Organization", with Governments already struggling to address rising unemployment and economic downturn.

"But the pandemic also poses a significant threat to the maintenance of international peace and security -- potentially leading to an increase in social unrest and violence that would greatly undermine our ability to fight the disease", he warned, later stating that the Council’s engagement will be critical to mitigate these implications.

"Indeed, a signal of unity and resolve from the Council would count for a lot at this anxious time", he said.

The UN chief outlined eight ways COVID-19 could undermine global peace and security, beginning with a further erosion of trust in public institutions if people perceive that their authorities had mishandled response or were not transparent.

The pandemic’s economic impacts could create "major stressors" in fragile societies or less developed countries, for example, while the ensuing economic instability will have devastating consequences for women as they make up the majority in the  worst-affected sectors.

Stressing that "this is not a time for political opportunism", the Secretary-General also feared electoral processes could be affected as postponing or proceeding with votes could spark political tensions and undermine legitimacy.

"In some conflict settings, the uncertainty created by the pandemic may create incentives for some actors to promote further division and turmoil. This could lead to an escalation of violence and possibly devastating miscalculations, which could further entrench ongoing wars and complicate efforts to fight the pandemic", said Mr. Guterres.

With most Governments focused on the pandemic, terrorist groups could see "a window of opportunity to strike", with the situation in the Sahel a particular concern.

"The weaknesses and lack of preparedness exposed by this pandemic provide a window onto how a bioterrorist attack might unfold – and may increase its risks. Non-state groups could gain access to virulent strains that could pose similar devastation to societies around the globe."

"We are seeing stigma, hate speech, and white supremacists and other extremists seeking to exploit the situation", the UN chief said.

"We are witnessing discrimination in accessing health services.Refugees and internally displaced persons are particularly vulnerable. And there are growing manifestations of authoritarianism, including limits on the media, civic space and freedom of expression".

UN Photo/Mark Garten
Secretary-General António Guterres holds a virtual press conference to provide an update on his call for a global ceasefire during the COVID-19 outbreak.

The UN chief reminded Ambassadors of his recent appeal for an immediate global ceasefire during the pandemic.

Some warring parties have taken steps to lay down their arms, and UN representatives will continue their efforts on this front.

Following the meeting, Security Council members issued a statement expressing support for the Secretary-General's efforts concerning  the potential impact of the pandemic to conflict-affected countries, and the need for unity and solidarity with all those affected.

♦ Receive daily updates directly in your inbox - Subscribe here to a topic.
♦ Download the UN News app for your iOS or Android devices.
secretary-general|security council|COVID-19|coronavirus 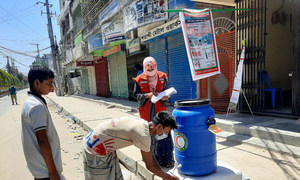 As governments struggle to cope with the COVID-19 pandemic, billions of people living in countries teetering on the brink of economic collapse are being threatened further by a looming debt crisis, according to a new UN report released on Thursday. 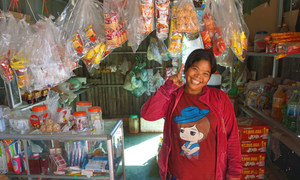