Living apart, ‘we must stand together’ to battle coronavirus pandemic – UN rights chief

The COVID-19 pandemic is a “colossal test of leadership”, the top UN rights official said on Thursday, underscoring the need for “decisive, coordinated and innovative action from all, and for all”.

“We simply cannot return to where we were just a few months ago”, UN High Commissioner for Human Rights Michelle Bachelet said in an informal briefing to the Human Rights Council, urging instead, a more “cooperative, global and human rights-based approach” to the crisis.

“We are physically distant today, but we must stand together”, she stressed.

And while it is natural and necessary for national efforts to be a strong priority in any crisis, Ms. Bachelet said that as this is a global pandemic, “only global solidarity will ensure that we can combat it effectively”.

As Governments face difficult decisions on a daily basis, the UN rights chief underscored the “imperative of respect” for civil and political rights in responding to the pandemic.

She voiced concern over certain countries' adoption of unlimited emergency powers that are not subject to review and by steps taken to restrict freedoms, including of the media.

“I urge all Governments to greatly increase access to accurate information”, Ms. Bachelet said, pushing for an end to any blanket internet and telecommunication shutdowns, under the premise that “transparency is paramount and can be life-saving in a health crisis”.

In addressing the crisis, the High Commissioner spotlighted that special considerations must be taken for vulnerable groups, including women.

Noting that 70 per cent of the world's health-workers are women, she maintained that their protection and adequate remuneration are of “paramount concern”.

At the same time, women are more likely to work in low-wage and informal sectors, without paid sick leave, health insurance or social protection and the elderly are often subsisting without any form of pension.

Moreover, confinement measures are an additional burden when caring for those sick, the aged and out-of-school children. And women and girls face increased risks of domestic violence.

According to the UN rights chief, the epidemic has clarified the need for the world to redouble its efforts to ensure that all people, including the most vulnerable, benefit moving forward.

She said that the 2030 Agenda for Sustainable Development was the world’s “strongest tool” to create more inclusive and sustainable economies, and to shape more resilient societies, including against pandemics.

Underscoring that protecting the environment is “the best way to protect human health and wellbeing, including from pandemics”, she said that environmental degradation and biodiversity loss, creates the conditions for the type of animal-to-human transmission, that “has repeatedly resulted in vital epidemics”.

Ms. Bachelet underscored that no country was prepared for the current shock, which she maintained has been exacerbated in every State by inequalities in accessing healthcare, social protections and public services.

“Throughout the response and recovery stages of the epidemic, we must all step up and demonstrate global solidarity”, concluded the High Commissioner. “We must build back better”.

‘Leave no one behind’

Meanwhile, an independent UN expert reminded Governments and international financial institutions of their commitment “to leave no one behind”.

“I am deeply concerned that decision makers will step away from their promises to reduce inequalities between and within countries during the current fight against the coronavirus pandemic, by adopting policies which may reinforce and exacerbate vulnerabilities that already exist”, said the UN Special Rapporteur on the right to development, Saad Alfarargi.

Pointing out that measures are largely imposed from the top-down, and that at the international level, there are few rights-based decision-making guidelines, he said that the meaningful participation of the disadvantaged and marginalized is “essential” to ensure the equal sharing of benefits.

He urged that data be gathered on the impact of the pandemic, disaggregated by gender, age, disability, income, race and ethnicity “to accurately assess the situation, to make inequalities visible, and to identify those who have been left behind.”

“Only based on such data we can develop evidence-based policies that specifically target those most in need”, concluded the UN expert.

UN News/Elizabeth Scaffidi
As the epicenter of the COVID-19 pandemic, New York City sent out an alert requesting healthcare workers.
♦ Receive daily updates directly in your inbox - Subscribe here to a topic.
♦ Download the UN News app for your iOS or Android devices.
COVID-19|coronavirus 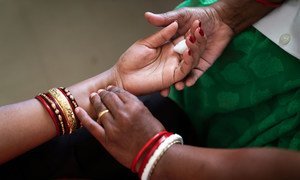 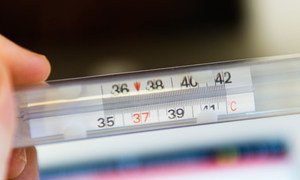