Laws underpinned by religious conviction that discriminate against women and the  LGBT+ community should be repealed, and gender-based violence carried out in the name of religion by non-State groups must be addressed, an independent UN expert said on Monday in a report presented to the Human Rights Council.

“I firmly reject any claim that religious beliefs can be invoked as a legitimate ‘justification’ for violence or discrimination against women, girls or LGBT+ people”, said Ahmed Shaheed, UN Special Rapporteur on freedom of religion or belief, noting that “the right to freedom of religion protects individuals and not religions as such.”

In his report, the UN expert urges States to repeal gender-based discrimination laws, including those enacted with reference to religious considerations that criminalize adultery; criminalize persons on the basis of their actual or perceived sexual orientation or gender identity; criminalize abortion in all cases; and facilitate religious practices that violate human rights.

“Women and LGBT+ people experience discrimination and violence inflicted in the name of religion by State and non-State actors that impedes their ability to fully enjoy their human rights, including their right to freedom of religion or belief,” said Mr. Shaheed.

The independent expert also expressed deep concern at the rise in political campaigns, and those carried out by religious institutions and their followers, which invoke religious freedom to seek to rollback human rights that are, he said, fundamental to gender equality, at both national and international levels.

“Religious communities are not monolithic. In many religions, a plurality of self-understandings exists, some of which may be more committed than others to advancing gender equality and non-discrimination”, the UN expert added.

“While religious organizations are entitled to autonomy in the administration of their affairs, such deference should be extended within a holistic conception of rights grounded in the universality, indivisibility, interdependence and inalienability of all human rights.

“States have an obligation to guarantee to everyone, including women, girls and LGBT+ people, an equal right to freedom of religion or belief, including by creating an enabling environment where pluralist and progressive self-understandings can manifest,” Shaheed said.

The Special Rapporteur also presented reports on his recent country visits to the Netherlands and Sri Lanka to the Human Rights Council.

Special Rapporteurs are part of what are known as the Special Procedures of the Human Rights Council. The appointed experts work on a voluntary basis; they are not UN staff and do not receive a salary. They are independent of any government or organisation and serve entirely in their individual capacity. 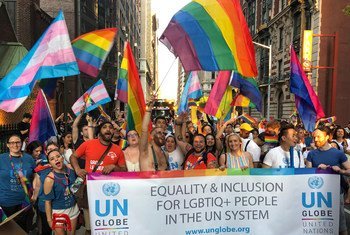