You don’t have to be from New York or even the United States to be a Harlem Globetrotter. Yet in the team's 93-year history, less than two dozen players have been born overseas, UN News learned, during an impromptu visit by the legendary basketball role models to UN Headquarters this week.

This year, the exhibition team that integrates athletics, theatre and fun into the squad mantra, has for the first time ever signed players from China and Poland to be part of the rookie class of 2020.

Over the years, the Globetrotters have played more than 26,000 exhibition games in 124 countries and territories, showcasing their iconic skills in every corner of the globe.

And each year they dribble and pass their way through more than 450 live events. 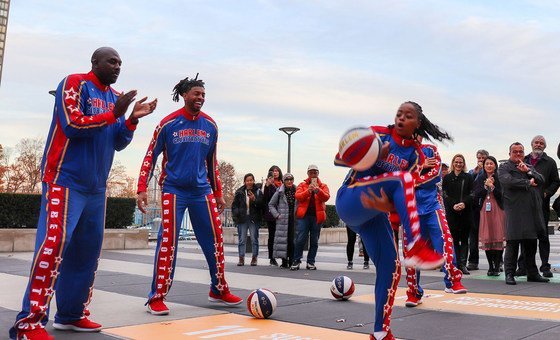 Much like the UN, these gifted players often break down cultural and societal barriers – only they do it through fancy footwork and basketball-handling mastery.

In their first-ever visit to the UN, members of the team were given a guided tour, touching on all the highlights, including the General Assembly Hall and the Norman Rockwell Mosaic, “The Golden Rule”.

And they also saw a short film about Sports and Development around the 17 Sustainable Development Goals (SDGs).

But the visit was far from one-sided. They dazzled staff and visitors alike with their showmanship and trademark antics on the Visitor’s Plaza.

‘A blessing’ to be a Globetrotter

There, UN News caught up with Cherelle "Torch" George, a two-year veteran with the team and the 16th woman to play with the Globetrotters. At 5’3” she’s one of the shortest members in the lineup.

While pointing out that others stand at 6’9” or 6’11”, Torch quickly indicated though that she can “hold her own”.

But how does she feel playing alongside the men?  “It’s a dream come true” she spelled out. “Being able to travel the world and make an impact on lives”.

This feisty young woman also saw a correlation between the team and the UN, namely to unite people: “We bring families together, we bring nations together!”, she said, calling it “a blessing” to be able to travel the world and be “ambassadors of goodwill”.

Torch was also enthusiastic to have her first teammates from China and Poland.

‘Adventure of my life’

Speaking to rookie Paweł “Dazzle” Kidoń from Poland, UN News learned that the team discovered him at one of their pre-game Magic Pass meet-and-greets last spring during a tour.

The 5’-11” guard stopped by a ball-handling trick station where, to everyone’s amazement, he put on a display that captivated all – including the Harlem Globetrotters.

His success in making the cut is not lost on this agile young man. When he started doing basketball tricks as a youth, he hoped that one day he would wear a Harlem Globetrotter jersey.

“This is a dream come true for me”, he raved, calling the upcoming tour “the adventure of my life!”.

♦ Receive daily updates directly in your inbox - Subscribe here to a topic.
♦ Download the UN News app for your iOS or Android devices.
sports|United States 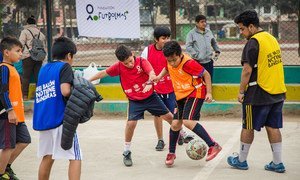 Sport brings people together “regardless of conditions or flags”, a senior United Nations official in Perú said on Tuesday referring to a new initiative launched over this past weekend to promote the well-being of children and youth in Lima’s refugee and migrant communities through football. 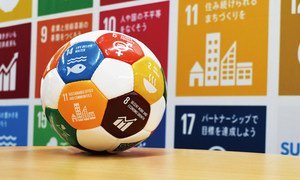 Weeding corruption out of sport an investment in development: UN crime-fighting agency

Sports scandals, including allegations of endemic corruption and the involvement of organized crime, threaten to undermine the sector’s potential to contribute to peace and global development, a senior United Nations official said on Tuesday