The attack in the city of Halle, in eastern Germany, occurred on Yom Kippur, or the Day of Atonement: the holiest day in the year for Jewish people.

The alleged attacker, believed to be a right-wing extremist, wore military-style clothing and was wearing a video camera, livestreaming the assault online, according to media reports.

UN chief António Guterres has strongly condemned the attack, according to a statement issued by his spokesperson.

“He regards this as yet another tragic demonstration of antisemitism - perpetrated on the holy day of Yom Kippur - which needs to be fought with the utmost determination,” it said.

Just last month, the Secretary-General launched the United Nations Plan of Action to Safeguard Religious Sites which aims to protect these locations from attacks and guarantee the safety of those who want to worship in peace.

The statement called on Governments to support the plan, concluding with “Houses of worship around the world must be safe havens for reflection and peace, not sites of bloodshed and terror."

♦ Receive daily updates directly in your inbox - Subscribe here to a topic.
♦ Download the UN News app for your iOS or Android devices.
Germany|anti-Semitism 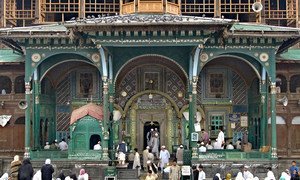