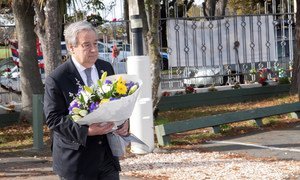 In his message for the first-ever International Day Commemorating the Victims of Acts of Violence Based on Religion or Belief, UN Secretary-General António Guterres on Thursday recalled that world religions “espouse tolerance and peaceful coexistence in a spirit of shared humanity”.

And yet, over the past few months, there have been an increasing number of religious-based attacks.

“On this Day, we reaffirm our unwavering support for the victims of violence based on religion and belief,” stated the UN chief.

End the crackdown on freedom of expression, was the strong call to the Government of India from five United Nations independent rights expert on Thursday.

Relentless sequence of disasters in Asia-Pacific 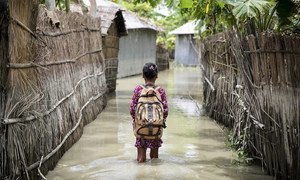 Changing patterns and worsening impacts of natural disasters in Asia and the Pacific, coupled with environmental degradation and climate change, are not only making efforts to predict such catastrophes more difficult, but are also a “sign of things to come”, the United Nations development arm in the region has warned.

Issued on Thursday by the UN Economic and Social Commission for Asia and the Pacific (ESCAP), the Asia-Pacific Disaster Report 2019 revealed that the annual economic losses due to disasters cost the region nearly $675 billion, about 2.4 per cent its gross domestic product. 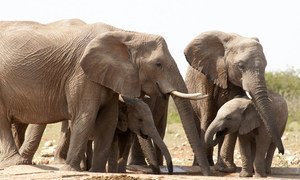 Attempts to overturn a ban on trade in elephant ivory by a handful of African countries have been firmly rejected at an international wildlife meeting of conservationists and Governments in Geneva.

In a vote on Thursday afternoon, Parties to the Convention on International Trade in Endangered Species - known as CITES - decided against the proposals put forward by Botswana, Namibia and Zimbabwe, by a ratio of about four to one.

More than 50 other proposals are up for discussion, covering 36,000 species of animal and plant life, with 183 signatories to the Convention taking part.

In another vote on Thursday, States accepted greater controls on trade in giraffes, whose dwindling population is at even greater risk than elephants, conservationists warned.

According to CITES experts, there are only “a couple of tens of thousands” of giraffes left, compared with “a couple of hundred thousand” elephants.

Under Convention rules, committee votes can be overturned in next week’s plenary session, although this is unlikely, a CITES spokesperson said, especially when the results are so “lop-sided”.

And to Africa now, Secretary-General António Guterres condemned a 19 August attack on the military camp of Koutougou, in Burkina Faso, which official reports say was one of the country’s deadliest attacks this year.

He expressed “deep condolences” to the victims’ families, the people and the Government.

The UN chief further condemned the “ongoing indiscriminate attacks against civilian populations” and called for the authorities to swiftly bring the perpetrators to justice.

Listen to or download our audio News in Brief for 22 August on Soundcloud: