OCHA/Yaye Nabo Sène
A group of people advocate against hate and discrimination based on ethnicity and religion in the Central African Republic. (2017)
6 August 2019
Human Rights

The UN’s top rights official has added her voice to condemnation of the weekend mass-shootings in the cities of El Paso and Dayton, insisting on Tuesday that “not just the US, but all States” should do more to stop discrimination.

Speaking to journalists in Geneva, Michelle Bachelet’s spokesperson, Rupert Colville, from the Office of the High Commissioner for Human Rights (OHCHR), welcomed US condemnation of “racism, hatred and white supremacy” in the wake of these “two awful tragedies” which claimed at least 29 lives in Texas and Ohio on Saturday.

“We unequivocally condemn racism, xenophobia and intolerance – including white supremacy - and call on States, not just the US but all States, to take positive steps to eradicate discrimination”, Mr. Colville said.

The development echoes comments on Monday by UN Secretary-General António Guterres following the attacks, in which he expressed solidarity “with the peoples and Governments of the United States and Mexico, from where a number of those killed and injured in the El Paso attack hailed”.

In his statement, Mr. Guterres also stressed the need “for all to work together to counter violence rooted in hatred, racism, xenophobia and all forms of discrimination”.

Asked whether the American President’s rhetoric about migrants could have contributed to the latest violence, Mr. Colville replied that all authorities should ensure that their actions in no way contributed to public attitudes that were discriminatory, or that stigmatized and dehumanized minorities.

This included migrants, refugees, women, LGBT, “or any so-called ‘other’”, he insisted, noting that unless authorities took “primary responsibility”, these groups remained vulnerable to reprisals and attacks.

Regarding Mr. Trump’s reference to a new law which would include the death penalty for hate crimes and mass shooters, Mr. Colville stressed that OHCHR opposed the death penalty in all circumstances, and that it had no place in the 21st century.

Hate crimes needed to be tackled along with their causes, he added, but new laws needed to be written very carefully as well, so that they took into consideration human rights and freedoms.

On whether mentally-ill people were responsible for those shootings, Mr. Colville quoted former UN High Commissioner for Human Rights, Zeid Ra’ad Al Hussein, who said that it was “hard to find a rational justification that explains the ease with which people can buy firearms, including assault rifles, in spite of prior criminal backgrounds, drug use, histories of domestic violence and mental illness, or direct contact with extremists – both domestic and foreign”.

Reflecting on measures that might stop a growing number of hate crimes in the U.S. and elsewhere – and their amplification via social media - Mr. Colville urged online communication companies and governments to work together to ensure that human rights considerations were “baked in” when developing legislation, policies, and social media products to help identify and reduce risks.

♦ Receive daily updates directly in your inbox - Subscribe here to a topic.
♦ Download the UN News app for your iOS or Android devices.
Hate Speech|United States|racism 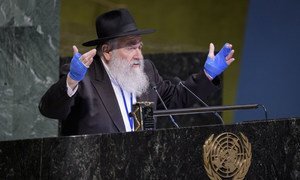