UN Photo/Sylvain Liechti
Scene from the camp of the United Nations Multidimensional Integrated Stabilization Mission in Mali (MINUSMA) in Timbuktu. The camp sustained an attack on 3 May 2017, which caused the death of a Liberian peacekeeper and injured others. (16 May 2017)
23 July 2019
Peace and Security

A formal agreement between Liberia and the UN to supply peacekeeping personnel to serve in the UN Stabilization Mission in Mali (MINUSMA), marks an “immensely significant” transition for the former war-torn West African nation, its UN Ambassador said in New York on Tuesday.

Ambassador Dee-Maxwell Saah Kemayah, was speaking after signing a new Memorandum of Understanding (MoU) with the UN’s head of Operational Support, (DOS) Atul Khare, acknowledging Liberia’s contribution of a Force Protection Company to MINUSMA. The 105-strong contingent, consists of 105 peacekeepers who have been serving in the key base of Timbuktu, since October 2016.

For decades, Liberia was a host nation for ‘blue helmets’ rather than a provider of peacekeeping troops, beginning in 1993, including a Peacekeeping Mission that was based in the country between September 2003, and March last year.

That month, UN chief António Guterres welcomed the full drawdown of the UN Mission in Liberia (UNMIL) and congratulated its people for turning the page on crisis and conflict. A total of 202 peacekeepers lost their lives, in the aftermath of two devastating civil wars, between 1989 and 2003.

Under-Secretary-General Khare said during the signing ceremony on Tuesday that "Liberia's path to peace demonstrates the clear positive impact of UN peacekeeping as a country that moved from conflict to stability and today is a key partner in assisting other countries in need".

At the signing, the UN also paid tribute to the service and sacrifice of Liberian peacekeeper Ousmane Ansu Sherif, who lost his life in an attack on a MINUSMA camp in Timbuktu, in May 2017.

Ambassador Kemayah, who took up his post last September, said the signing was “immensely significant, as it mutually reinforces the commitment between the Government of Liberia through the Armed Forces of Liberia and the United Nations to the peacekeeping initiatives in MINUSMA.”

He further stressed that the MoU would “enhance the capacity of the Armed Forces of Liberia (AFL) to adequately provide personnel, equipment and services in support of its Military Mission in Mali; and to be better prepared to contribute more fully to the concerted and collective peacekeeping objectives of MINUSMA."

Liberia contributes 118 uniformed personnel (of which 10.6% are female) who serve in MINUSMA, and the UN Mission in South Sudan (UNMISS).  Currently, the UN has 321 active MOUs with 80 countries. The Department of Operational Support hosts these agreements on behalf of the Organization.

The Department of Operational Support, created on 1 January this year, as part of the UN Secretary-General's management reform, provides a one stop-shop to all UN Member States providing Uniformed Capabilities to Peacekeeping Operations, mobilizing and sustaining operations, including in some of the world's most complex, dangerous and volatile environments. 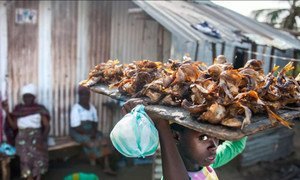 FROM THE FIELD: Liberia boosts efforts to guard against rising seas

With rising sea levels due to climate change already affecting coastal communities in Liberia, there are fears that densely populated parts of the capital Monrovia could be submerged, unless action is taken. 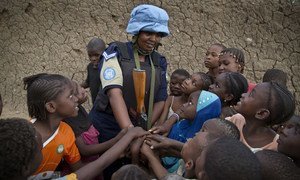 Citing the “encouraging progress” achieved by United Nations peacekeeping operations in Africa – which hosts half of all ongoing missions – UN chief António Guterres on Tuesday called the international community to strengthen cooperation and commitment to peacekeeping, during an open debate held at the Security Council.