As UN missions are drawn down and eventually closed, stronger partnerships are needed to ensure that countries recovering from conflict can transition successfully to a phase of durable peace and development, UN Secretary-General António Guterres told the Security Council on Thursday.

The UN chief told representatives at the briefing, entitled “Peacebuilding and sustaining peace: strengthening partnerships for successful nationally-owned transitions”, that the Organization is putting a stronger focus on transition periods, when the UN reconfigures its missions, or leaves a country.

The meeting was part of a process which has seen the Security Council and UN system place more emphasis on ensuring the successful closures of UN missions, following the release of a 2014 report by a group of independent experts, which said that the UN system needed to pay more attention to transitions, describing them as “frequently poorly timed and poorly managed”.

The loss of life, economic devastation and reversal of development gains caused by a relapse into conflict can go far beyond a country’s borders António Guterres, UN Secretary-General

The authors also noted that the drawdown of peace operations usually comes with visibly diminished political attention and a rapid drop-off in financing to continue UN engagement through a country team.

This was reflected in the comments made by Mr. Guterres on Thursday, when he noted the risks inherent in mission transitions: “The international community may pay less attention to the country concerned. Strategic gains achieved during decades of international support can hang in the balance. And the loss of life, economic devastation and reversal of development gains caused by a relapse into conflict can go far beyond a country’s borders”.

The 2014 report led to the adoption of Security Council and General Assembly resolutions, which recognized the importance of providing adequate resources for peacebuilding, including during the transition period during the drawdown of missions.

Since then, the UN has implemented measures to improve transition planning, such as strengthening the ability of resident coordinators (the senior UN official in a particular country) to conduct conflict analysis and prevention.

In his briefing remarks, Mr. Guterres said the UN’s ongoing reform process is leading to more “joined-up engagement”, from the deployment of peace missions, to their reconfiguration and eventual withdrawal.

'We must prioritize partnerships'

The importance of partnerships, and close collaboration between the UN and host governments in ensuring successful transitions, was highlighted in the 2018 Declaration of Shared Commitments on Peacekeeping Operations, and the UN Secretary-General’s Action for Peacekeeping Initiative, and emphasised by Mr. Guterres during Thursday’s Council session.

“We must prioritize and strengthen partnerships”, he said, “with national stakeholders, across the UN system and with international financial institutions, and with Member States, for collective action to ensure their success”. Strong partnerships, added Mr. Guterres, can help avoid a drop-off in support as the UN reduces or alters its presence in a country.

The UN chief gave several examples of UN peacekeeping missions in transition, that, he said, he is following closely. They include Darfur, Sudan, where local UN operations have allocated $32 million to priority areas such as the rule of law, human rights, and durable solutions for displaced people; Haiti, where the UN Country Team is working with the national government to work on priority projects; and Colombia, where the UN has supported the peace process with two successive political missions.

Countries that are “healing after conflict”, said the Secretary-General, may face urgent and complex challenges, and need support to address the “root causes of conflict”, in areas such as political leadership, strong institutions, and sustainable development. He cited the UN Sustainable Development Cooperation Framework as a “central tool” for support, helping countries to put in place reforms that ensure “atrocities and serious crimes will never happen again”.

Mr. Guterres insisted that the UN’s role in transitions must be “comprehensive and coherent”, and work in an integrated way to address the drivers of conflict, which include “poverty, exclusion, inequality, discrimination and violations of human rights, exacerbated by climate change and the movement of people.” 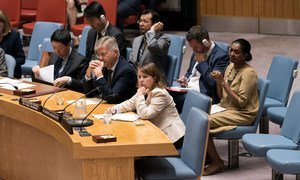 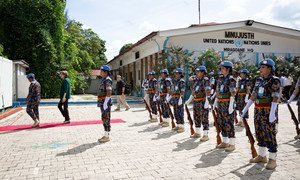 The Security Council on Monday approved a resolution to create a UN “Integrated Office” in Haiti, designed to support the country’s government in strengthening political stability and good governance. The Office, named BINUH, will replace the peacekeeping mission in Haiti on October 16, putting an end to 15 years of peacekeeping presence in the country.