Ahead of 2020 elections, situation in Burundi shows encouraging signs but remains fragile

Photo: OCHA/ Julie Languille
Jacqueline lives with her six children in Kirundo Province. She is a farmer, but was unable to harvest at the beginning of the year due to a lack of rainfall since November. The past three consecutive plantations have been lost due to the drought, putting her in a critical situation. Most of the time Jacqueline can provide only one meal a day to her family.
14 June 2019
Economic Development

A UN Security Council meeting on the security and political situation in Burundi was held on Friday, as the country continues to grapple with a four-year-long crisis and is gearing up for new elections in 2020.

The situation deteriorated sharply in April 2015, when President Pierre Nkurunziza announced that he would run for a controversial third term, seen by many Burundians as a breach of the constitution. The announcement led to an upsurge of violence in the country, leaving hundreds dead and prompting around half a million people to flee the country.

Currently, close to 1.8 million people are in need of humanitarian assistance.

Toward peaceful and fair elections?

In addition to a variety of recent encouraging developments, Jürg Lauber, the chair of the Burundi configuration of the Peacebuilding Commission, told the Security Council that, during his recent trip to the country, he was assured that President Nkurunziza will not stand as a candidate.

“With regard to preparations for the peaceful conduct of the elections, the need for technical support, for instance in the areas of police training and security sector reform, was mentioned. I was informed that the [CENI] would invite observers from international and regional organizations to the elections,” Ambassador Lauber explained.

However, he noted that “a number of interlocutors voiced concerns over difficulties encountered by members of the opposition parties to gather freely” and some “expressed concerns over recent measures against of two foreign media that allegedly violated national regulations, according to the national authority.”

Although the Burundian Government claims that the security and human rights situation has improved, the UN human rights office (OHCHR) in Bujumbura, which was continuing to receive reports of gross violations – including arbitrary killings, enforced disappearances, torture, and arbitrary detentions – was forced to close in February, after a 23-year presence in the country.

“The human rights situation remains worrying in view of many violations of fundamental civic and political freedoms as reported by political actors, some media and civil society organizations,” said Assistant-Secretary-General Fernandez-Taranco.

This was supported by Mr. Lauber’s recent visit, as he explained that “a number of interlocutors voiced concerns about alleged violent incidents and human rights violations that are not properly investigated and prosecuted.”

He added however that “the Minister for Human Rights, Social Affairs and Gender confirmed Burundi's readiness to engage in technical cooperation with international human rights bodies and highlighted the ongoing work on the implementation of the recommendations from the Universal Periodic Review  of Burundi in the UN Human Rights Council.”

Watch the briefing by Jürg Lauber, chair of the Burundi configuration of the Peacebuilding Commission :

Despite a relatively satisfactory agricultural production this year, the Security Council was told that nearly 1.8 million people remain at risk of food insecurity “due to recurrent and devastating climatic hazards”.

In addition, it was noted that “increases in unemployment and the rise in prices of basic commodities and services have negatively affected the economic and socio-cultural rights.”

As there are still over 350,000 Burundian refugees in the region, the UN refugee agency (UNHCR) is assisting them as well as people who voluntarily repatriate to Burundi, primarily from Tanzania.

“The protection and assistance to refugees, the sustainable reintegration of those who choose to return as well as of internally displaced people remains a core concern and funding requirements remain acute in this area,” noted Mr. Lauber.

Funding for life-saving programmes remains a problem overall, as the humanitarian response plan is only 24 per cent funded to date. Mr. Fernandez-Taranco called on the international community to increase their contributions.

Watch the briefing by Smaїl Chergui, African Union Commissioner for Peace and Security:

♦ Receive daily updates directly in your inbox - Subscribe here to a topic.
♦ Download the UN News app for your iOS or Android devices.
Burundi|security council 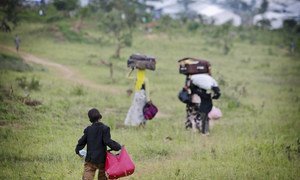 In a statement released on Tuesday, UN High Commissioner for Human Rights, Michelle Bachelet, announced her regret at the closure of the UN Human Rights Office in Burundi – which was set up more than two decades ago – at the insistence of the country’s government. 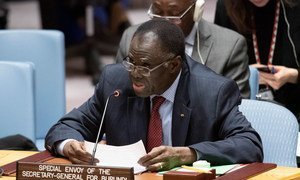 An inter-Burundian, inclusive dialogue remains the only viable option for lasting settlement of the political crisis and the holding of elections in 2020 in a peaceful environment, the United Nations Special Envoy for the country, Michel Kafando, told the Security Council on Tuesday.