The development, which is likely linked to the ongoing outbreak in neighbouring Democratic Republic of the Congo (DRC), comes ahead of a key meeting on Friday at the World Health Organization (WHO), to decide whether to announce an international public health emergency.

“The second of three persons who were confirmed Ebola positive has passed away,” said WHO spokesperson Tarik Jasarevic in Geneva. “Obviously, it is very important that the Ministry of Health together with the WHO go quickly to this area where the cases have been identified to make sure that all those who may have been in contact with these people have been monitored.”

According to the Ugandan authorities, which confirmed the outbreak on Tuesday, the victims are a five-year-old boy from Uganda and his 50-year-old grandmother.

Symptoms of #Ebola can be sudden and include:
-Fever
-Fatigue
-Muscle pain
-Headache
-Sore throat

These can be followed by:
-Vomiting
-Diarrhoea
-Rash
-In some cases, both internal and external bleeding

The youngster fell ill  after  visiting DRC’s Mabalako  Health  Zone  to  attend  the burial of his grandfather, a confirmed Ebola-sufferer, who died in the community on 1 June.

The boy and his family then returned to Uganda through the Bwera border on Monday, where relatives sought help at Kagando hospital for symptoms including vomiting and bloody diarrhoea.

Health workers identified Ebola as a possible cause of illness and he was transferred to an Ebola treatment centre (ETC) at Bwera, Kasese.

He died on Tuesday evening before being given a dignified burial, according to the Ugandan authorities, which noted that in addition to the boy’s grandmother who succumbed to Ebola virus, his three-year-brother has also tested positive for the disease.

A fourth suspect case – a 23-year-old man from Mukungu village in Katwe - is also awaiting lab confirmation and some 27 contacts of the victims have been identified so far, the health ministry statement added.

The Ugandan authorities also said that the Minister of Health, WHO’s Country Representative and other partners had met at Bwera Hospital on Wednesday to discuss an action plan.

Initial measures to prevent the transmission of Ebola include a ban on mass gatherings such as markets, the vaccination of contacts and health workers, and a public information radio campaign to allay concerns and rumours about the outbreak.

Alongside WHO, UN Children’s Fund UNICEF announced that it had launched an emergency Ebola response plan in Uganda, in response to the latest developments.

The move follows months of preparedness and prevention efforts as Ebola cases have continued increase in DRC, where there have been more than 2,000 infections and nearly 1,400 deaths in the country’s worst recorded outbreak after it began last August.

“As our thoughts are with this young boy’s family, this is a tragic reminder that even one case of Ebola is one too many,” said UNICEF Representative in Uganda, Dr. Doreen Mulenga. “We must do everything possible to stop this outbreak in its tracks and prevent other needless deaths.”

In recent months, UNICEF has supported the Government of Uganda implement extensive programmes to make sure communities in numerous districts in western Uganda bordering the DRC are prepared for a potential outbreak.

With the aim of empowering communities in numerous districts in western Uganda bordering the DRC against a potential Ebola outbreak, UNICEF has already made nearly 350,000 household visits to share information about the disease and the importance of seeking help quickly.

Other measures include building capacity for infection prevention and control in health facilities through water, sanitation and hygiene interventions, and training nearly 1,500 Uganda Red Cross volunteers and para-social workers to support communities dealing with Ebola-related stress.

“Awareness is the best way to prevent the spread of this virus,” said Dr. Mulenga. “Strategically communicating the correct knowledge and best practices to affected communities is critical to doing so.”

♦ Receive daily updates directly in your inbox - Subscribe here to a topic.
♦ Download the UN News app for your iOS or Android devices.
ebola|Uganda 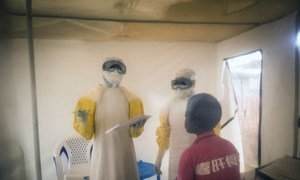 The World Health Organization (WHO) and Ministry of Health, confirmed on Tuesday the first case of the deadly Ebola virus in Uganda, stemming from the nearly year-long current outbreak in neighbouring Democratic Republic of the Congo (DRC).