Arne Hoel/World Bank
Oceans and seas are home to vast biodiversity. A woman in Entebbe, is photographed on the shores of Lake Victoria, Uganda.
8 June 2019
SDGs

“We need to empower each and every citizen to take care of the ocean and enable all women to play transformative and ambitious roles in understanding, exploring, protecting and sustainably managing our ocean”, said Audrey Azoulay, Director-General of UNESCO, pointing out that this year’s “special edition” of World Oceans Day links the themes of gender equality and ocean preservation.

Women engage in all aspects of ocean interaction, yet in many parts of the world, women’s contribution, both towards ocean-based livelihoods like fishing, and conservation efforts, are invisible and, gender inequality persists “from the marine industry to the field of ocean science”.

The UN says there is also very little data and research on these issues, and a concerted action towards gender equality and the empowerment of women and girls is still needed in all ocean-related sectors to achieve Sustainable Development Goal 5 (SDG 5).

Not only is the ocean an increasingly important battleground for achieving gender equality, Ms. Azoulay said, “but building a more gender equal society also means empowering women and girls to be the actors of positive ocean change”.

Citing UNESCO’s Global Ocean Science Report, Ms. Azoulay highlighted that women represent only 38 per cent of all ocean scientists. And while women make up 50 per cent of the marine and coastal industries workforce, “their wages continue to be lower than those of men”.

“Mainstreaming gender equality throughout the Ocean Science Decade will help ensure that, by 2030, women as much as men are driving ocean science and management, helping to deliver the ocean we need for a prosperous, sustainable and environmentally secure future”, stressed the UNESCO chief.

Pointing out that it is the source of the world’s fresh water, she recalled in her message on Saturday that the ocean “produces half of the oxygen we breathe, and powerfully affects our climate”.

“Yet the ocean is endangered”, she lamented, saying that global warming, acidification, pollution, dead zones, harmful algal blooms and ecosystem degradation “reveal how far human activities have impacted on our oceans”. 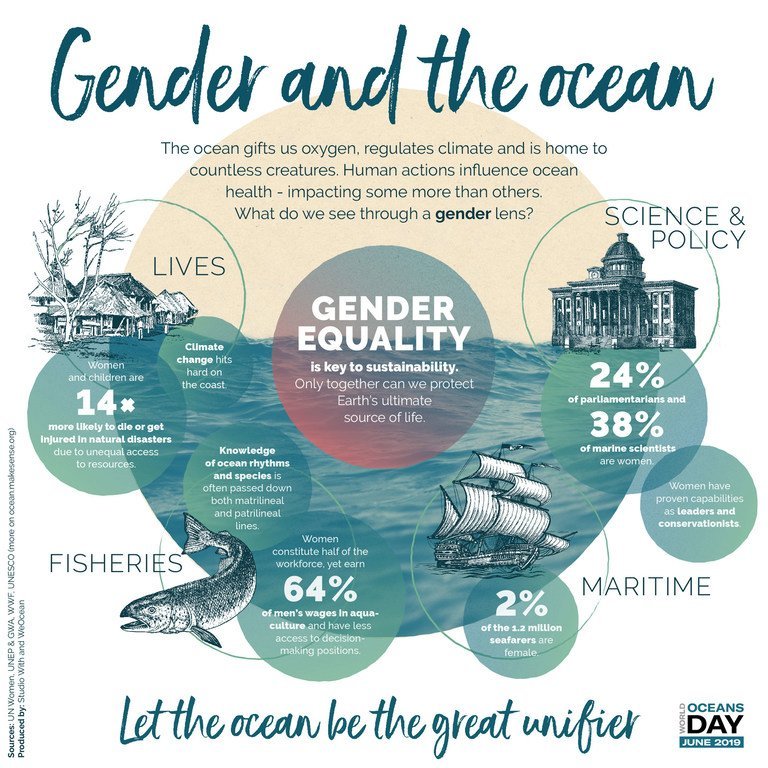 In his message, Secretary-General António Guterres flagged that for too long, “women have also been unable to share equally in ocean-supplied benefits”.

They are often “segregated into low-skilled and unrecognized labour”, such as fish processing, and “denied a decision-making role”, he elaborated, adding that “similar treatment occurs in related sectors”, such as shipping, coastal tourism and marine science, “where the voices of women are frequently not heard”.

The UN chief highlighted that "confronting gender inequality is essential” to achieving the ocean-related Goal and targets of the 2030 Agenda for Sustainable Development.

“We must ensure an end to unsafe work conditions and guarantee that women have an equal role in managing ocean-related activities,” he underlined.

In closing, Mr. Guterres urged governments, international organizations, private companies, communities and individuals to “promote gender equality and the rights of women and girls as a crucial contribution to meeting ocean challenges”.

Plastic pollution in the ocean is an especially pressing issue, having increased tenfold since 1980, according to the first Global Assessment Report on Biodiversity of the Intergovernmental Science-Policy Platform on Biodiversity and Ecosystem Services, launched on 6 May in UNESCO.

A beach clean-up in Mumbai, India, illustrates how ocean debris leads to the deaths of millions of seabirds every year, by UN Environment Programme

Moreover, plastic debris leads to the deaths of more than a million seabirds and 100,000 marine mammals every year.

“This situation should engage us all in the preservation of our common environmental heritage”, Ms. Azoulay said. “It should drive humankind to understand the paramount importance of maintaining a healthy ocean, which we all depend on for life, climate, well-being and, more essentially, our future”.

Against the backdrop, she noted that because “ocean challenges require urgent and collective action to reverse current trends”, the General Assembly proclaimed 2021-2030 as the Ocean Science Decade for Sustainable Development.

Coordinated under UNESCO’s Intergovernmental Oceanographic Commission, the decade aims to “encourage international scientific collaboration as well as sustainable management of our oceans and coasts through the interplay of science and policy”, she continued.

It also aims to mobilize citizens across cultures, gender and generations to preserve the ocean “because it is about our very survival as a species”, she maintained.

Combatting plastics on the water

Meanwhile, World Scouting has teamed up with the UN Environment Programme (UNEP) to create a new movement to battle against plastic pollution.

Coral Reefs restoration at the coast of Banaire in the Caribbean., by UN Environment Programme

Since its introduction in five countries across Africa, including Ghana, Kenya, Uganda, Mauritius and Tanzania, some 27,000 youth from the Scouts, Girl Guides, Junior Achievement and various Universities, have undertaken a new Plastic Tide Turners Challenge Badge.

“The Challenge Badge has made me live by the 3Rs: reduce, reuse and recycle,” said Yussif Kamara, a Scout from Accra in Ghana, who also participated in the badge programme.

As part of UNEP and The Youth and UN Global Alliance’s (YUNGA) Clean Seas campaign, the aim is to mobilize a direct youth-led contribution to SDGs 14 and 15, Life Below Water, and Life on Land.

And for the first time in World Scouting’s history, the badges will be made from ocean recovered plastic with the first certificates awarded to young leaders that have completed all three levels of the badge.

At UN Headquarters in New York, storytellers and speakers globally have gathered to share their perspectives on building greater ocean and gender literacy and discovering ways to promote gender equality in ocean-related activities, such as marine scientific research, fisheries, labour at sea, migration by sea and human trafficking, policy-making and management.