WFP/Annabel Symington
The World Food Programme (WFP) is providing food assistance for those most urgently in need of support in what has emerged as one of the world’s worst hunger crises, 2019.

“Today twenty million Yemenis – some 70 per cent of the population – are food insecure, marking a 13 per cent increase from last year”, WFP Spokesperson Herve Verhoosel told reporters at a regular press briefing in Geneva. “Nearly 10 million of them are one step away from famine”.

After receiving reports that intensive clashes erupted in several locations within Hudaydah city, including an attack yesterday on a key supply route from Hudaydah to Sana’a, WFP expressed security concerns in ensuring proper humanitarian support by WFP and other UN agencies.

Hudaydah has been the focus of clashes between Government forces and Houthi opposition fighters. It is a crucial gateway for the entry of aid, desperately needed to save millions of Yemenis from starvation.

Last December, UN-brokered consultations between the Government and Houthi leaders resulted in the Stockholm Agreement, which set out terms for ongoing troop-withdrawal negotiations and a ceasefire that continues to hold, albeit fragilely.

Hunger in #Yemen is threatening a whole generation. For millions of families across the war-torn country, life is nothing but a struggle for survival. Children suffer the most.@WFP_MENA pic.twitter.com/TMjAg6LfH5

Meanwhile since early this month, warring factions in a northern district, have displaced some 11,000 families in Hajjah governorate, an area on Yemen’s northern Red Sea coast, which borders Saudi Arabia.

“In northern Hajjah governorate, already one of the most food insecure areas of Yemen, a recent surge in violence risks pushing thousands more to catastrophic levels of hunger”, he said.

Moreover, in the last six months, the number of people displaced by violence has increased sharply from 203,000 to around 420,000.

WFP’s ongoing rapid-response food rations have been able to support over 5,000 families and Hajjah governorate has around 200 food distribution points covering 1.5 million people.

According to Mr. Verhoosel, WFP classes 28 of 31 districts in Hajjah as humanitarian emergencies, eight of which are experiencing pockets of “catastrophic levels of food insecurity”.

“In the next few days WFP will begin distributing food rations to all families in Kushar district”, he said, noting that the “epicenter of recent violence in Hajjah governorate” was a mountainous district only 31 miles from the Saudi border.

Mr. Verhoosel spelled out: “We also need access to the districts surrounding Kushar, which have likely received a surge of families fleeing violence”. He noted that neither WFP nor its partners have, so far, been able to access the districts of Harad, Mustaba, Midi and Hayran where an estimated 50,000 people teeter on the brink of starvation.

“Once again”, the spokesperson said, “WFP needs free and unhindered access to the vulnerable populations in these districts if we are to prevent the food security situation from further deterioration.”

WFP is scaling up this year to reach 12 million people each month; a 50 per cent increase over its 2018 targets, including eight million with food rations; 2.4 with commodity vouchers and, eventually, 1.6 million with cash assistance. 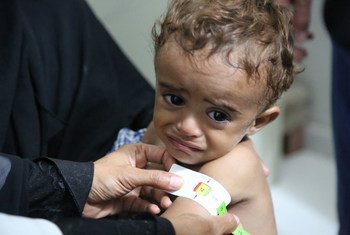 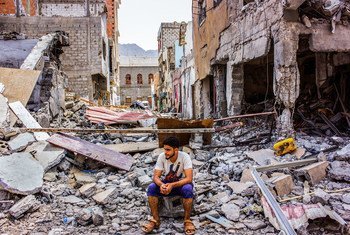