UNICEF/Amer Al Shami
A street in Douma, Eastern Ghouta, Syria. The OPCW Fact-Finding Mission said there were "reasonable grounds" to believe chlorine gas had been used in a chemical weapons attack in April 2018.
6 March 2019
Peace and Security

The report from the UN-backed Organisation for the Prohibition of Chemical Weapons (OPCW) made up of 193 Member States, concluded based on its Fact-Finding Mission assessment, that there were “reasonable grounds that the use of a toxic chemical as a weapon has taken place, on 7 April”, adding that reactive chlorine had been detected in samples taken, around two weeks after the incident.

The attack in the city of Douma, a suburb of the capital Damascus, came at a crucial stage of the siege by Syrian Government forces, backed by Russia, on rebel-held Eastern Ghouta, which subsequently fell. Dozens were reportedly killed during the likely chemical attack, with videos purporting filmed during the aftermath widely shared across the world, showing children choking and gagging.

Last June, the UN Commission of Inquiry on Syria, delivered a report to the Human Rights Council, saying that the siege and recapture of Eastern Ghouta by Government and allied forces, had been marked by war crimes and crimes against humanity.

The latest FFM’s report on Douma, was due to be shared with States Parties to the Chemical Weapons Convention, and passed on to the Security Council. The report does not assign blame for the likely use of chlorine gas, and found no grounds or evidence, to support an assertion from the Syrian Government that rebel fighters in Douma had use a local facility, to manufacture chemical weapons.

Last June, the OPCW was given new powers to assign blame for future chemical weapons attacks, but this did not include the FFM sent to Douma, to gather evidence.

♦ Receive daily updates directly in your inbox - Subscribe here to a topic.
♦ Download the UN News app for your iOS or Android devices.
security council|chemical weapons in Syria|OPCW 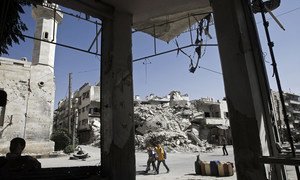 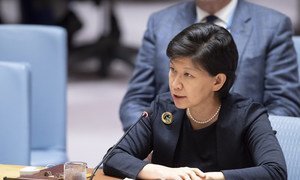