UNAIDS/MUJAHID SAFODIEN
Mandisa Dukashe and her family live in Eastern Cape, South Africa. Mandisa is a trained nurse and works in the response to HIV to ensure quality control in health-care settings. She is living with HIV and encourages people to get tested for HIV. Her husband and two daughters are all HIV-negative.
1 March 2019
Human Rights

While the dignity of every person is enshrined in the Universal Declaration of Human Rights, “human rights violations are happening all over the world because of discriminatory laws and practices,” said  Michel Sidibé, Executive Director of UNAIDS.

“Laws should protect, not reject. Every person has an equal right to be treated with dignity and respect,” he declared.

Last year at least 20 countries set travel restrictions against HIV-positive people; some 29 States required a husband or partner’s consent for a woman to access sexual and reproductive health services; 17 countries criminalized transgender people; and same-sex sexual relations were criminalized in at least 67 nations and territories worldwide.

And that is just the tip of the iceberg.

But the news was not all bad. Last year some countries made landmark decisions to change discriminatory laws and bills.

India’s Supreme Court struck down the section of its Penal Code that criminalized same-sex sexual relations; the Philippines lowered the age to 15 for voluntary HIV testing without the need of parental or guardian consent; and Malawi removed provisions from a draft bill that would have criminalized HIV non-disclosure, exposure and transmission.

“All countries must carefully examine their laws and policies in order to ensure equality and protection for all people, without exception,” asserted Mr. Sidibé.

A discriminatory law may be amended or abolished:

UNAIDS has identified a range of laws that are discriminatory, impede access to health and social services, restrict freedom of movement and violate human rights.

On Zero Discrimination Day, UNAIDS is proposing specific actions that individuals, civil society organizations, parliamentarians and donor organizations can take to change these laws. They range from being an ally to someone affected by a discriminatory law to joining a non-governmental organization, tabling amendments to laws and calling for legislation reviews.

As part of the Global Partnership for Action to Eliminate all Forms of HIV-Related Stigma and Discrimination, UNAIDS is actively working with United Nations partners, governments and civil society organizations to make the change.

♦ Receive daily updates directly in your inbox - Subscribe here to a topic.
♦ Download the UN News app for your iOS or Android devices.
Zero Discrimination Day

Fighting discrimination against women is key to beating AIDS 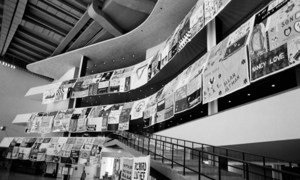