UNICEF/Amer Al Shami
On 29 August 2018 in the Syrian Arab Republic, Yamen (left), 11, was displaced with his family from Al-Houla in northern rural Homs and now lives in a tented camp in northern rural Idlib. Yamen has developmental delays and requires specialized medical care that has been impossible to obtain due to multiple displacements.
19 February 2019
Human Rights

Civilians in Syria's north-western city of idlib continue to be used “as pawns”, caught in the crossfire of bombardments by the Government and its allies, and attacks by non-State armed groups, the United Nations human rights chief, Michelle Bachelet, warned on Tuesday.

Since December, the intensified ground-based bombardment of the city, located in the north-west of the country, coupled with a series of attacks by non-State actors, has led to numerous civilian casualties and left close to a million people, including hundreds of thousands of displaced people, in an extremely vulnerable situation, her statement explained.

“Large numbers of civilians, including hundreds of thousands of displaced people, in Idlib and northern Aleppo are living an intolerable existence,” said Ms. Bachelet.

“They are trapped between the escalation of hostilities and bombardment on the one hand, and, on the other, are forced to live under the extremist rule of Hay’at Tahrir Al-Sham and other extremist fighters who regularly carry out targeted killings, abductions and arbitrary detention.”

The High Commissioner called on “all parties involved, as well as external governments with influence, to ensure that the protection of civilians is held paramount in the planning and execution of all military operations in accordance with international law”.

Idlib and areas of northern Hama and western Aleppo governorates, are part of a “demilitarized buffer zone” but, for over two months, violence has escalated again, including an increase of infighting amongst non-State actors and in the use of improvised explosive devices in areas they control, including by the extremist group, Hay’at Tahrir Al-Sham.

The list of fatalities includes a high number of women and children.

“I urge all the parties involved to, first and foremost, ensure that civilians themselves, and civilian infrastructure, are protected as required by international humanitarian and international human rights law,” the High Commissioner said.

"The principles of distinction, proportionality and precaution must be fully respected, and military objects must not be placed in the vicinity of civilians,” she added.

Ms. Bachelet also expressed concern about the well-being of some 20,000 people who fled ISIL-controlled areas in eastern Deir-ez-Zor Governorate in recent weeks and are now being held in makeshift camps for displaced persons run by Kurdish armed groups.

According to OHCHR, these include the US-backed Syrian Democratic Forces (SDF), who are reported to be preventing IDPs from leaving the camps in what appears to amount to deprivation of liberty.

She added she remains “particularly concerned” about the situation of some 200 families, including many women and children, who are reportedly trapped in the tiny area still under the control of the Islamic State of Iraq and the Levant (ISIL) and are apparently being actively prevented from leaving by ISIL.

The UN rights chief said they “continue to be subjected to intensified air and ground-based strikes by the US-led coalition forces and their SDF allies on the ground”.

"Civilians continue to be used as pawns by the various parties,” Ms. Bachelet lamented, calling on responsible parties “to provide safe passage to those who wish to flee, while those wish to remain must also be protected as much as possible”.

“They should not be sacrificed to ideology on the one hand, or military expediency on the other. If protecting civilian lives means taking a few more days to capture the last fraction of land controlled by ISIL, then so be it," she stated. 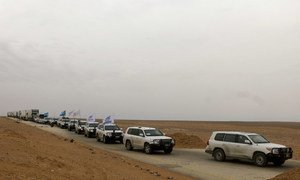 The biggest UN humanitarian convoy yet to operate inside Syria has successfully distributed aid to 40,000 desperate people in a hard-to-access desert camp near the country’s southern border with Jordan, the Organization announced on Friday.