In his appeal to a UN panel of experts led by philanthropist Melinda Gates and Alibaba founder Jack Ma, Secretary-General António Guterres called on its members to reflect on the risks and benefits of our digital age – the so-called Fourth Industrial Revolution.

“We need new thinking and innovative ideas to harness the benefits and manage the risks of this digital age,” he said via video-link, while urging the High-level Panel on Digital Cooperation to reflect on how technology could accelerate the 2030 Agenda on sustainable development.

Created at the express wish of the UN chief in 2018, the high-level panel is a relative rarity – only 20 or so have been convened in the organization’s more than 70-year history.

The panel’s diverse membership - which includes US internet pioneer Vint Cerf, and South Korea-based digital marketing mastermind Sophie Eom – fulfils the UN chief’s wish to include input from industry and the private sector, as well as governments, academia, civil society and inter-governmental organizations.

The discussions will result in a final report, to be published in the summer.

“This is truly an exciting and critical moment,” Mr Cerf said. “We just marked the 70th anniversary of the Universal Declaration of Human Rights, and 50 per cent of the world is now online. Today, we are challenged to induce responsible behaviour in the digital age.”

Another original feature of the panel’s work is its mission to be inter-disciplinary and hear “from all four corners” of the globe, to better understand the priorities and ideas of UN Member States, private sector companies, civil society organisations, academia and tech communities, said spokesperson Anoush Tatevosian.

“It’s not just about artificial intelligence, data privacy or internet governance, it’s about the intersection of these things,” she explained. “The problem today is that these issues are often discussed in their separate corners.”

The Panel’s online call for contributions, which is open until 31 January 2019, has already yielded close to 100 written submissions from 33 countries.

Of the ideas analysed so far, most highlighted “inclusivity” as the most important value for the digital age, Ms Tatevosian said.

Since July 2018, Panel members have met more than 2,000 individuals and convened seven virtual discussion groups on topics such as inclusive development, data, human rights and human agency, along with digital trust and security.

In addition to visiting US Silicon Valley and technology hubs in China, Israel and India, members have also met policymakers in Paris, Beijing, Brussels, Berlin, Washington, Delhi and Astana and participated in digital policy events including the Web Summit, the Raisina Dialogue in India, and Africa e-Commerce Week.

Digital age challenges ‘among key issues of our time’

Also meeting in Geneva, the Global Commission on the Stability of Cyberspace heard that the global debate around international security and information and communications technology (ICT) had evolved into a wider discussion about development and human rights, after a first General Assembly resolution in 1998.

Renata Dwan, Director of UNIDIR, the UN Institute for Disarmament Research, hosted the discussions, and said that after being on the agenda for several decades, “what we’ve seen is really the discussion around what cyber-stability means and for whom it means something, really expand”.

“We’ve seen the debate that started about State behaviour and responsible State behaviour has really become a much wider discussion about the role of the private sector, the role of communities, of regions, of cities, and indeed of individuals – and how to develop space for rights, for equity, for development and for access that enhances development of all”, she added.

We’re at the point of asking ourselves, ‘will emerging technologies contribute to peace overall or will they undermine it?'  - UN's Fabrizio Hochschild

Participating at both the cybersecurity event and the high-level panel, Fabrizio Hochschild, UN Assistant Secretary-General for Strategic Coordination, explained that initial hopes for digital technology had given way to a more cautious assessment.

“After years of unbridled optimism - justified optimism - surrounding the development of digital technologies of cyberspace, we now have come to the sober realization that those positive developments carry downsides,” Mr. Hochschild explained.

He added: “We’re at the point of asking ourselves, ‘will emerging technologies contribute to peace overall or will they undermine it? Will they generally further access to sustainable development or will they further inequality? Will they facilitate respect for human rights or will they provide new tools to those who wish to contain or violate the realization of human rights?’”

Such questions reflect the Secretary General’s belief that the challenges posed by the digital age are one of the key issues of our time - “next to climate change, next to dealing with inequality,” Mr. Hochschild said, before noting the “absence” of international mechanisms that could prevent digital flashpoints from escalating.

“Some 30 States have the capacity to defend themselves and those capacities are daily being built up”, he explained. “But where does that leave the other 163 countries that don’t have such a capacity, or the financial means, or political means to defend themselves?”

Suggesting that the digital sphere “amplifies existing inequalities”, the UN official noted that among the most pressing challenges are tackling the lack of internet access in the world’s poorest nations - where fewer than one in five people has regular electricity - and addressing a large and growing digital gender gap.

“In 2019 it is shocking that the number of women who access the internet is 10 per cent lower than men,” Mr. Hochschild said. “In developed countries it’s 33 per cent lower, and the worst thing is, those statistics are getting worse, not better.”

♦ Receive daily updates directly in your inbox - Subscribe here to a topic.
♦ Download the UN News app for your iOS or Android devices.
High-Level Panel on Digital Cooperation|Internet

‘Maximize the positive’ from new technologies, for our digital future, Guterres urges 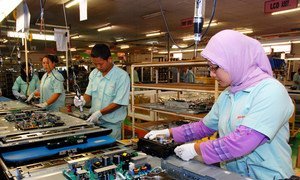 Unprecedented innovations in the world of work provide “countless opportunities” but unless they are embraced through action, inequality and uncertainty will only widen in the workplace, according to a landmark new International Labour Organization (ILO) report released on Tuesday. 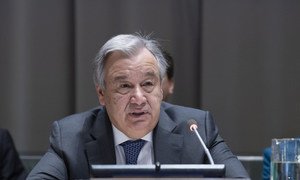