As gender-equality advocates discuss how a lasting peace can be secured in Afghanistan, the top UN official in the country has underscored the importance of women’s participation as “vital to ending the conflict and ensuring long-lasting stability.”

“Gender inequality continues to prevail in Afghanistan with regard to women’s participation in peace processes, despite the fact that women are as affected by the conflict as men,” said Tadamichi Yamamoto, the UN’s Special Representative and head of its mission in the country (UNAMA), on Tuesday, during a series of nationwide meetings focused on women, peace and security.

Known as the Global Open Days, he said at the gathering that women “must be ready to actively participate in - and contribute to - the peace process, and they must be represented in the negotiating team and consultative bodies on peace.”

Women are as affected by the conflict as men – Tadamichi Yamamoto, UN Special Representative in Afghanistan

At the final meeting of the provincial Open Days consultations in Kabul, hosted by UNAMA and UN Women, participants highlighted challenges for women’s meaningful input in peace processes – as peacebuilders, activists, advocates, mediators and negotiators – as well as opportunities to amplify women’s voices and ensure they are at the negotiating table.

“Not only does peace last longer when women lead and participate in peace processes, but also women have a right to participate in negotiating peace in Afghanistan,” said Aleta Miller, the UN Women Country Representative for Afghanistan. “No decisions on the future of Afghanistan should be made without the full participation of all citizens affected by that future, and no peace process will be complete and lasting without the direct involvement of women.”

Some 30 gender-equality advocates noted it was common for male family members to discourage or prohibit female participation in any activities outside the home. They stressed that by discriminating against women, and failing to respect, protect and promote their human rights, it limits women’s ability to participate in resolving Afghanistan’s conflict.

Those in attendance spoke of the need to overcome barriers preventing women’s voices from being heard in peace discussions, saying those obstacles are compounded by general insecurity and targeted attacks against women’s human rights defenders, including journalists, activists and high-profile women leaders.

Global Open Days events were launched in 2010 to support dialogue between UN senior leadership and women’s organizations and gender-equality advocates across the world, as part of implementing UN Security Council resolutions on women, peace, and security. 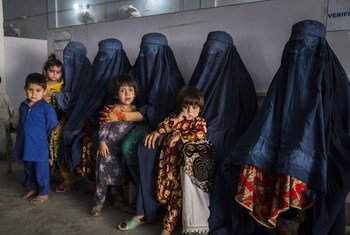 Afghanistan can rely on international support along harrowing road to peace, and beyond

Afghanistan has undertaken significant reforms which the international community will continue to support long after peace is secured in the war-torn country, a top UN official pledged on Wednesday.