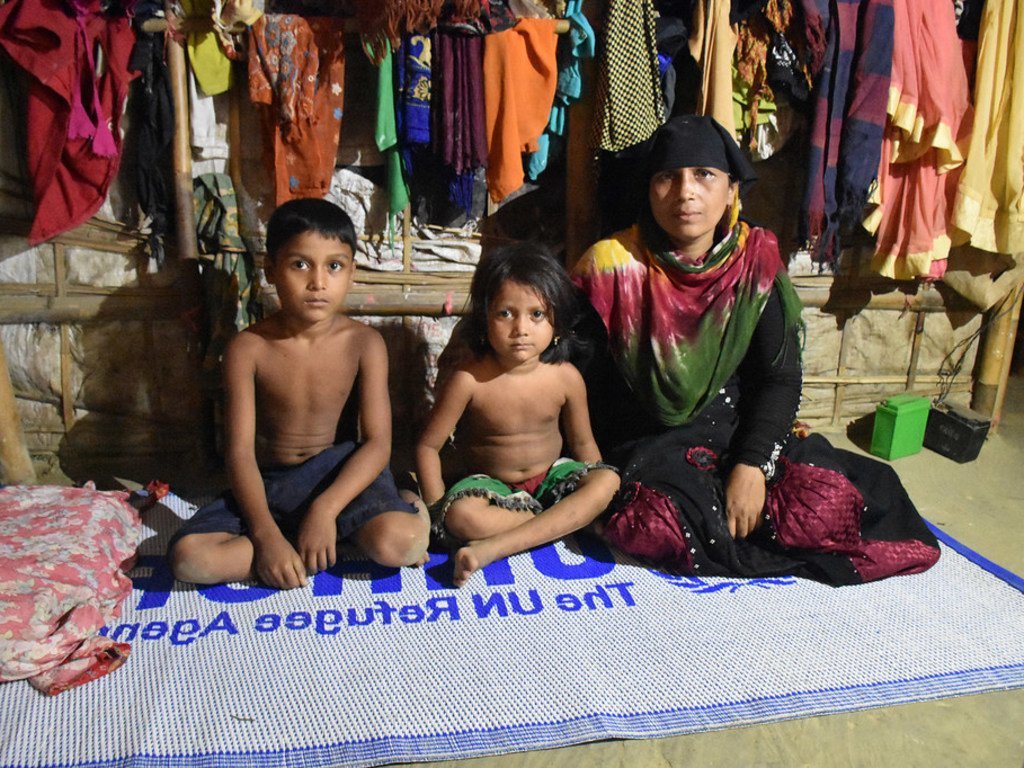 UNHCR/Chris Melzer
A Rohingya refugee from Myanmar, sits with two out of her four children in their shelter at Nayapara camp, south-east Bangladesh.
12 November 2018
Migrants and Refugees

Returns of Rohingya refugees, forced to flee their homes due to widespread and systematic violence in northern Myanmar, “should only take place at their freely expressed wish” the United Nations top refugee official has stressed, amid concerns that conditions at places of origin are not yet conducive to safe, dignified and sustainable returns.

In a statement, on Sunday, UN High Commissioner for Refugees Filippo Grandi, said that repatriation of refugees “is premised upon the free and informed decision by refugees … to return.”

Since late August 2017, widespread and systematic violence against Myanmar’s mainly-Muslim minority Rohingya, has forced hundreds of thousands to flee their homes in Rakhine state and seek refuge across the country’s border, in Bangladesh. Prior to that, well over 200,000 Rohingya refugees were sheltering in Bangladesh due to earlier displacements.

According to estimates, there are currently some 925,000 Rohingya refugees sheltering in Bangladesh.

“Returns should only take place at their freely expressed wish based on relevant and reliable knowledge of the conditions within the country of origin and the area of return,” said Mr. Grandi, noting that the “best way” to provide that knowledge to allow refugees “to go and see the conditions in Myanmar for themselves.”

“Before making a choice of whether to return or not, the refugees reportedly verified by Myanmar as having the right to return should be allowed to visit their places of origin in Rakhine state, or other places to which they might choose to return.”

According to media reports, some 4,355 people have been placed on a list approved for return by Myanmar. However, not everyone on the list has been informed and it is unclear how it was compiled. The first repatriations are said to start on Thursday.

High Commissioner Grandi also said that the responsibility rests with Myanmar, to ensure that conditions are conducive for voluntary, safe, dignified, and sustainable returns from Bangladesh.

At present, these conditions are not present, Mr. Grandi stated, adding that his Office, UNHCR, “remains committed” to supporting the Myanmar’s efforts to create such conditions, under the terms of a tripartite agreement signed by UNHCR, the UN Development Programme (UNDP) and Myanmar in June.

An Independent International Fact-Finding Mission on Myanmar, established by the UN Human Rights Council, has concluded that violence against the Rohingya community by Myanmar’s security forces amounted to “the gravest crimes under international law” and called for referring the situation to the International Criminal Court (ICC) or to an ad hoc tribunal for investigations and prosecutions.

A United Nations human rights expert has implored Bangladesh to shelve “rushed plans” to repatriate Rohingya refugees back across the border into Myanmar’s Rakhine State for fear that without safety guarantees from the Burmese Government, persecution and horrific violence could begin all over again.