UN Photo/Cia Pak
Secretary-General António Guterres presents his annual report on the work of the Organization ahead of the opening of the General Assembly’s seventy-third general debate.
19 October 2018
Peace and Security

In a statement released on Friday, UN Secretary-General António Guterres said that he is “deeply troubled” by the reported confirmation of the death of Jamal Khashoggi.

A tweet posted by the Saudi Foreign Ministry on Friday states that the missing Saudi journalist, a columnist with the Washington Post newspaper, was killed, claims reportedly echoed on Saudi State TV.

The tweet says that “discussions that took place with the citizen Jamal Khashoggi during his presence in the Consulate of the Kingdom in Istanbul…did not go as required and escalated negatively which led to a fight…which aggregated the situation and led to his death.”

The Secretary-General extended his condolences to Mr. Khashoggi’s family and friends and stressed the need for a prompt, thorough and transparent investigation into the circumstances of Mr. Khashoggi’s death and full accountability for those responsible.

Mr. Guterres’s comments are the latest in a chorus of concern and condemnation over Mr. Khashoggi’s disappearance from UN officials and independent UN human rights experts.

On Saturday Audrey Azoulay,, Director-General of the UN Educational, Scientific and Cultural Organization (UNESCO), firmly condemned the "brutal killing" of Khashoggi, and called for the perpetrators to be brought to justice, adding “The killing of Jamal Khashoggi reminds us of the need to fight for press freedom, which is essential to democracy. Accountability for these crimes is non-negotiable."

♦ Receive daily updates directly in your inbox - Subscribe here to a topic.
♦ Download the UN News app for your iOS or Android devices.
Jamal Khashoggi|Saudi Arabia 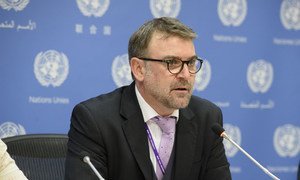